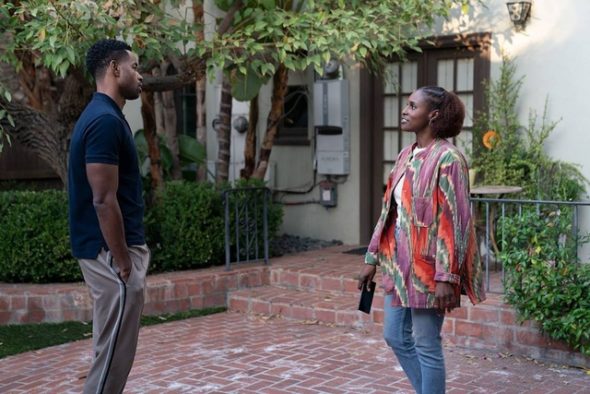 Can these friends make their way through thick and thin in the fourth season of the Insecure TV show on HBO? As we all know, the Nielsen ratings typically play a big role in determining whether a TV show like Insecure is cancelled or renewed for season five. Unfortunately, most of us do not live in Nielsen households. Because many viewers feel frustrated when their viewing habits and opinions aren’t considered, we invite you to rate all of the fourth season episodes of Insecure here. *Status update below.

An HBO single-camera comedy series, Insecure stars Issa Rae, Yvonne Orji, Jay Ellis, Natasha Rothwell, Amanda Seales, Kendrick Sampson, and Alexander Hodge. The TV show centers on friends Issa (Rae), Molly (Orji), Lawrence (Ellis), and Tiffany (Seales) as they deal with their own real-life flaws. They attempt to navigate different worlds and cope with an endless series of uncomfortable, everyday experiences. In season four, Issa pursues a passion project she actually cares about and Molly navigates a real relationship for the first time. Meanwhile, their friend Lawrence figures out what leveling-up means for him, and Tiffany’s baby changes the dynamic of the friend group.

What do you think? Which season four episodes of the Insecure TV series do you rate as wonderful, terrible, or somewhere between? Do you think that Insecure should be cancelled or renewed for a fifth season on HBO? Don’t forget to vote, and share your thoughts, below.

*5/2/20 update: Insecure has been renewed for a fifth and final season.