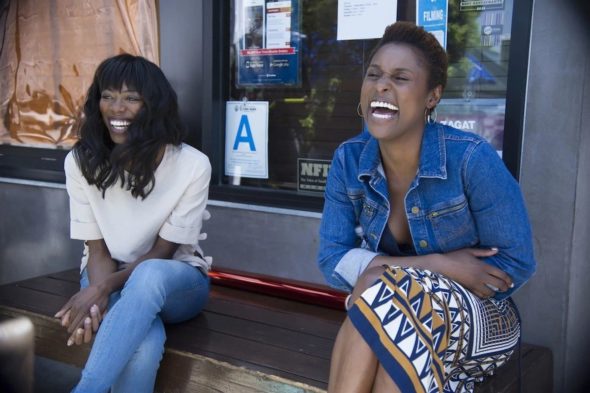 Looks like the lives of Issa and Molly will have a lot more ups and downs in the future. HBO has announced that they’ve renewed the Insecure TV show for a fourth season.

Four episodes of the current third season have aired thus far, averaging a 0.29 rating in the 18-49 demographic with 657,000 viewers. That’s way down when compared to season two but that season’s ratings were elevated due to airing on the same night as Game of Thrones, currently HBO’s biggest series.

HBO also renewed Ballers for a fifth season today. The newly ordered seasons of both Ballers and Insecure are expected to air in 2019.

LOS ANGELES, Sept. 6, 2018 – HBO has renewed the comedy series BALLERS for a fifth season and INSECURE for a fourth season, it was announced today by Amy Gravitt, executive vice president, HBO Programming.

INSECURE follows the friendship of two black women as they deal with their own real-life flaws while attempting to navigate different worlds and cope with an endless series of uncomfortable everyday experiences. Issa Rae, Yvonne Orji, Lisa Joyce, Natasha Rothwell, Amanda Seales and Y’lan Noel star in the hit comedy series, which returned for its eight-episode third season Sunday, Aug. 12 (10:30-11:00 p.m. ET/PT).

What do you think? Are you a fan of the Insecure TV show? Do you plan to keep watching this HBO series?

I am a senior citizen. I would have found this show tasteless a few years ago but African Americans women have always had special relationships with best friends especially in high school and college and it is mainly relevant for this reason. Through thick and thin. Many relationships are more than five decades old.

I love Insecure, I need Season 4…like now. This show is my favorite!! #TeamInsecure

I love this show. I want to see more. I wish issa would get with Daniel. Or nathan ..just one of them ..please keep the show ..how can i get the ratings up?!