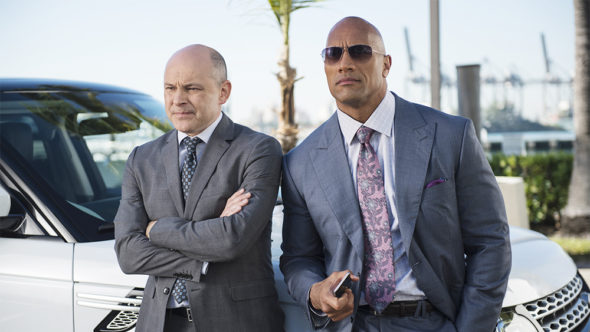 Dwayne “The Rock” Johnson is busier than ever with his movie career but he’s still making time for television. HBO has announced that his Ballers TV show has been renewed for a fifth season on the cable channel.

An HBO comedy-drama, Ballers stars Johnson, Rob Corddry, John David Washington, Omar Benson Miller, Donovan Carter, Troy Garity, London Brown, Jazmyn Simon and Brittany S. Hall. The series follows former superstar Spencer Strasmore (Johnson), who has re-invented himself as a financial adviser for both young phenoms and veteran superstars. Spencer’s role in his clients’ lives far exceeds money management as he struggles to help them navigate the many pitfalls that come with life in the spotlight. In season four, he and Joe (Corddry) head to Los Angeles, in hopes of capitalizing on the action sports market.

Season four of Ballers kicked off on August 12th. The four installments that have aired thus far have averaged a 0.40 rating in the 18-49 demographic with 958,000 viewers. Compared to season three, that’s down by about 50% in each category. A decline was expected since, last summer, Ballers aired out of HBO’s biggest show, Game of Thrones.

HBO also renewed Insecure for a fourth season today. Both HBO series are expected to air their respective new seasons next year. Here’s a portion of the press release:

LOS ANGELES, Sept. 6, 2018 – HBO has renewed the comedy series BALLERS for a fifth season and INSECURE for a fourth season, it was announced today by Amy Gravitt, executive vice president, HBO Programming.

Exploring the glamorous and often cutthroat world of pro football through a group of past and present players striving to stay in the game, BALLERS stars Dwayne Johnson as ex-superstar Spencer Strasmore, who has reinvented himself as a financial manager for today’s players. Created by Stephen Levinson (HBO’s “Boardwalk Empire”), the hit comedy series returned for its nine-episode fourth season Sunday, Aug. 12 (10:00-10:30 p.m. ET/PT).

What do you think? Do you like the Ballers TV show? Do you plan to keep watching this HBO series?

Gees!!!! Its only TV everyone. Watch it and have a good time, or change the channel. Stop being so sensitive.

My wife and I both love the show. Keep it coming

Love the show hope to see more, For me it shows football and sports from the inside out. To much money at the top. Let’s see more go Dwayne.

I liked the show ballers before it had to become about politics. Now I’m on the fence if I even want to watch the show anymore or not. WHY!!!WHY!!!WHY !!!

Was a great show, now just another Hollywood hate the old white guy BS. Stopped watching after “F*$K Whites , F*$K Trump” line by Ricky. Wake up hollywood and all demographics, don’t be fooled by hollywood any longer.

I became a bigger fan after the f@$k Trump episode!!! Different demographic do feel that way tho

I am a trump fan and love this shiw.Not all trump fans see everything as political.Its a great show.I there is a lot of truth being exposed the humor