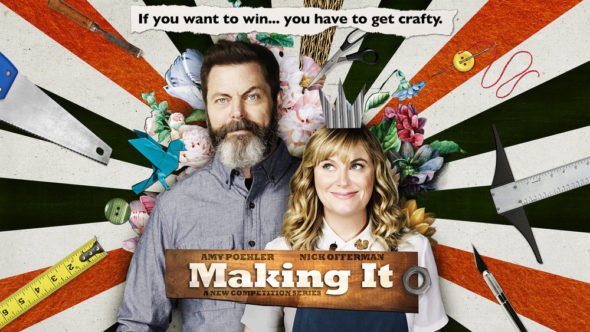 These days NBC populates its summertime slate with a lot of unscripted fare. Most of the series are big, splashy competitions like World of Dance or America’s Got Talent. This year though, the Peacock Network has also introduced something of a homier touch with its new Making It TV show. Can this DIY programming draw the elusive summer viewers back to their television sets? Will Making It be cancelled or renewed for season two? Stay tuned. *Status update below.

An NBC reality TV show competition, Making It comes from executive producers Amy Poehler and Nick Offerman. The Parks and Rec vets also host the show, which features accomplished crafters taking on “Faster-Craft” and “Master Craft Collection” challenges, in hopes of securing the title of “Master Maker” and the grand prize of $100,000. Simon Doonan, the Creative Ambassador for Barneys New York, and Dayna Isom Johnson, an Etsy trend expert, judge the competition.

9/5 update: You can see the rest of the latest night’s ratings.


What do you think? Do you like the Making It TV series? Should this NBC TV show be renewed for season two?

*8/21/18 update: NBC has renewed Making It for a second season. Details here.

I’m glad to finally see a show like this. I’ve been looking forward to it all summer. I haven’t seen eps. 2 and 3 yet because of illness but watched 4 and searched On-demand until I found the others. It didnt disappoint me. I like the hosts and judges and find the crafts interesting. I only wish I was so creative!

Knew this was a stinker before it even aired. Poehler has lost her mojo, and I have never thought Offerman was funny.

I really struggled to make it through the first episode. Humor was lame and everything felt forced and everyone disinterested. I’m certainly not planning to watch any more. Either change the host and make this a serious competition or make it a comedy. It isn’t succeeding as either right now.