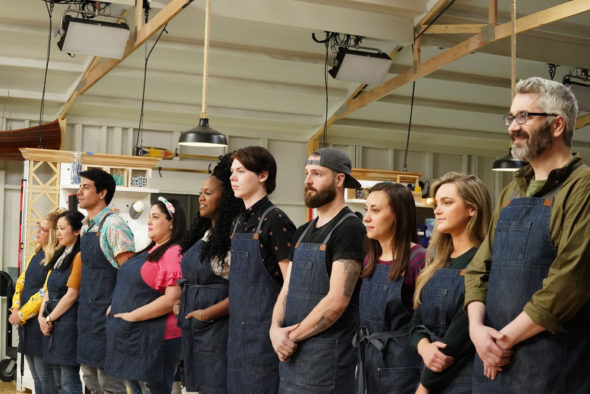 Are viewers interested in watching the crafty competitions in the second season of the Making It TV show on NBC? As we all know, the Nielsen ratings typically play a big role in determining whether a TV show like Making It is cancelled or renewed for season three. Unfortunately, most of us do not live in Nielsen households. Because many viewers feel frustration when their viewing habits and opinions aren’t considered, we invite you to rate all of the second season episodes of Making It here. *Status update below.

An NBC competitive crafting reality TV series, Making It comes from executive producers Amy Poehler and Nick Offerman, who also host the show. Each episode revolves around a central theme with the Maker contestants completing two crafts based on current trends in DIY and anchored in America’s love for all things handmade. The first challenge, a “faster-craft,” gives the Makers a limited time to execute their personal take on each theme. Next is the more in-depth “master craft” which challenges each Maker to display their respective expertise while combining originality, imagination, and quality finishing. The winners move on to the next round of the competition and, in the end, one contestant will be crowned “Master Maker”. Simon Doonan and Dayna Isom Johnson return as expert judges.

What do you think? Which season two episodes of the Making It TV series do you rate as wonderful, terrible, or somewhere between? Do you think that Making It on NBC should be cancelled or renewed for a third season? Don’t forget to vote, and share your thoughts, below.

I love watching the creative process and the different makers, but I have a hard time getting around the hosts who try to be funny but aren’t in the least. I wish that the show would concentrate on the projects and more about how they are accomplished instead of all the time on the hosts, whose comments are rarely helpful. My husband is a woodworker but will not watch this show because he dislikes the hosts and their silliness. Unfortunately, since they are also the executive producers, I don’t see this show surviving. If they want a third season, they… Read more »

This show is painful to watch, the hosts ramble and are just plain silly. Your IQ goes down as you watch it We turned it off after 15 minutes. Total waste of time.