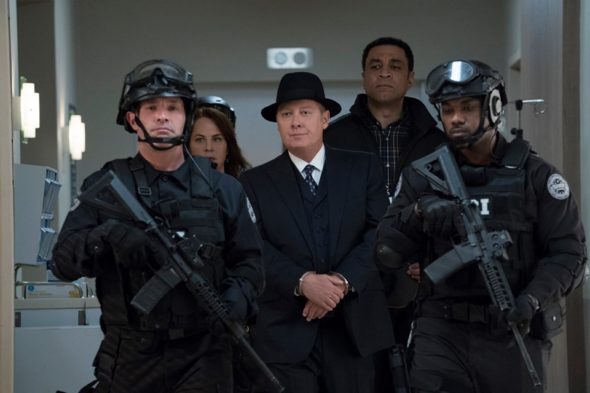 Will Red be victorious in the seventh season of The Blacklist TV show on NBC? As we all know, the Nielsen ratings typically play a big role in determining whether a TV show like The Blacklist is cancelled or renewed for season eight. Unfortunately, most of us do not live in Nielsen households. Because many viewers feel frustration when their viewing habits and opinions aren’t considered, we invite you to rate all of the seventh season episodes of The Blacklist here. *Status update below.

An NBC action-thriller, The Blacklist stars James Spader, Megan Boone, Diego Klattenhoff, Amir Arison, Hisham Tawfiq, and Harry Lennix. The crime drama centers on one of the FBI’s most wanted fugitives, Raymond “Red” Reddington (Spader), who offers to help the authorities if a specific rookie agent, Elizabeth Keen (Boone), partners with him. In season seven, Red finds himself alone in hostile territory, surrounded by old enemies and possibly new allies. He must stay one step ahead of the Blacklist’s most dangerous criminal, who will stop at nothing to unearth the very truth Red wants no one to know about. To find it, Katarina will insinuate herself into Liz’s life, who has finally reunited with her daughter Agnes. Katarina’s presence will bring danger to Liz’s doorstep and forever alter her relationship with Red.

What do you think? Which season seven episodes of The Blacklist TV series do you rate as wonderful, terrible, or somewhere between? Do you think that The Blacklist on NBC should be cancelled or renewed for an eighth season? Don’t forget to vote, and share your thoughts, below.

*2/20/20 update: NBC has renewed The Blacklist for an eighth season.