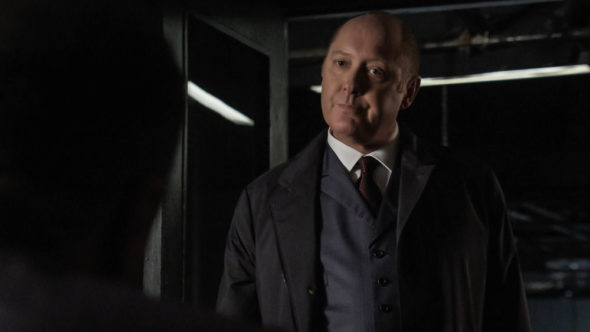 Reddington will be back to cause more trouble in the 2021-22 television season. The Blacklist TV series has been renewed for a ninth season on NBC. Season eight resumed last Friday night.

A crime thriller series, The Blacklist stars James Spader, Megan Boone, Diego Klattenhoff, Amir Arison, Hisham Tawfiq, Laura Sohn, and Harry Lennix. The crime drama centers on one of the FBI’s most wanted fugitives, Raymond “Red” Reddington (Spader), who offers to help the authorities if a specific rookie agent, Elizabeth Keen (Boone), partners with him. In season eight, with his back against the wall, Red faces his most formidable enemy yet — Elizabeth. Aligned with her mother, infamous Russian spy Katarina Rostova, Liz must decide how far she is willing to go to find out why Reddington has entered her life and what his endgame really is. The fallout between Red and Keen will have devastating consequences for all that lie in their wake, including the Task Force they helped to create.

Airing on Friday nights, the eighth season of The Blacklist averages a 0.40 rating in the 18-49 demographic and 3.51 million viewers. Compared to season seven, that’s down by 27% in the demo and down by 18% in viewership.

· NBC has renewed its signature drama “The Blacklist” for a ninth season.

· Through its first two episodes this season, “The Blacklist” is averaging 1.2 in 18-49 and the Nov. 13 premiere has reached 7.5 million viewers in total audience measurement.

· During the 2019-2020 season, “The Blacklist” reached nearly 39 million total viewers across linear and digital platforms.

· This Friday’s episode (Jan. 29) marks a landmark for the series as the #1 name on Raymond Reddington’s notorious blacklist is revealed.

· “The Blacklist” is a production of Davis Entertainment in association with Sony Pictures Television Studios and Universal Television, a division of Universal Studio Group.

What do you think? Are you still watching The Blacklist TV series? Will you be tuning in for season nine on NBC? How long do you think that this series should continue?

Love the show…..keep it going

Please keep it going and put Red and Keene back together, they make the show.

I really love this show! I was prepared for anything at the end of Season 8. I was even prepared for Reddington to say he was, in reality, Keen’s MOTHER, as they were doing that whole face change thing and all, LOL!!

We LOVE The BLACK LIST!!!!!!
As we wait for Series 9
Thank you to the full Cast and many many writers!

One of the best shows I’ve seen (and I’m 72). Red is a very complex, brutal (yet ultimately likable) character. I’ve heard Liz is leaving and that’s a shame; Not sure the show without both of them to act as foils for one another.

I love this show!! It’s amazing. Will follow it

Absolutely love it! The entire cast amazing, and James Spader is my absolute favorite. Please continue the series! I can’t get enough of Raymond Reddington!

Had to have another season the way season 8 ended. I really like the show.

Need to continue the Season 9 The Blacklist

Yes definitely have to know truth about reddington! I can’t believe Liz is dead without finding out! Is she really dead? Don’t like that ending. When does season 9 start? What a massive twist and cliffhanger!!!