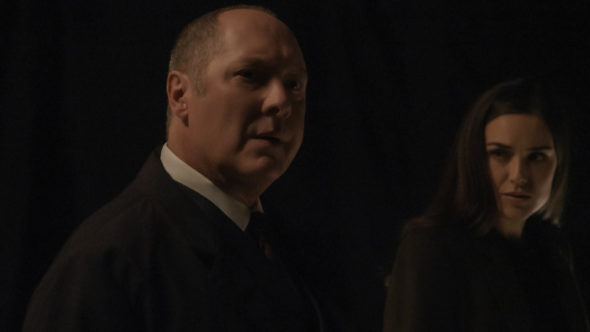 Will Red and Keen work together again? Has The Blacklist TV show been cancelled or renewed for a ninth season on NBC? The television vulture is watching all the latest cancellation and renewal news, so this page is the place to track the status of The Blacklist, season nine. Bookmark it, or subscribe for the latest updates. Remember, the television vulture is watching your shows. Are you?

Airing on the NBC television network, The Blacklist stars James Spader, Megan Boone, Diego Klattenhoff, Amir Arison, Hisham Tawfiq, Laura Sohn, and Harry Lennix. The crime drama centers on one of the FBI’s most wanted fugitives, Raymond “Red” Reddington (Spader), who offers to help the authorities if a specific rookie agent, Elizabeth Keen (Boone), partners with him. In season eight, with his back against the wall, Red faces his most formidable enemy yet — Elizabeth. Aligned with her mother, infamous Russian spy Katarina Rostova, Liz must decide how far she is willing to go to find out why Reddington has entered her life and what his endgame really is. The fallout between Red and Keen will have devastating consequences for all that lie in their wake, including the Task Force they helped to create.

The eighth season of The Blacklist averaged a 0.35 rating in the 18-49 demographic and 3.26 million viewers. Compared to season seven, that’s down by 36% in the demo and down by 23% in viewership. Find out how The Blacklist stacks up against other NBC TV shows.

Will NBC cancel or renew The Blacklist for season nine? It’s seemed like The Blacklist might be in its final year for a while but the show keeps going. The ratings are low but the series gained some viewers last year. I suspect that the series will continue as long as Spader wants to keep making it and as long as Sony Pictures Television (which produces the series) can make a financial deal with NBC that suits both sides. I’ll update this page with breaking developments. Subscribe for free alerts on The Blacklist cancellation or renewal news.

1/26/21 update: NBC has renewed The Blacklist TV series for a ninth season.

What do you think? Are you glad that The Blacklist TV show has been renewed for a ninth season? How would you feel if NBC had cancelled this TV series, instead?

I have always liked The Blacklist. Spader is great. Liz leaving wasn’t a surprise. I’m sure they will come up with another interest for red.