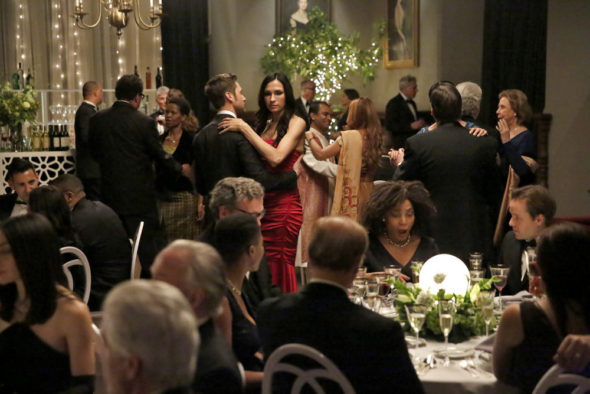 Can the Grey Matters operatives finally redeem themselves? Has The Blacklist: Redemption TV show been cancelled or renewed for a second season on NBC? The television vulture is watching for the latest cancellation and renewal news, so this page is the place to track the status of The Blacklist: Redemption season two. Bookmark it, or subscribe for the latest updates. Remember, the television vulture is watching your shows. Are you?

A spin-off of The Blacklist, this series premiered with pretty weak numbers and they haven’t exactly gotten better. While Redemption is a good bridge if the peacock network wants to break up  The Blacklist next season, I think the ratings are too low to bring Redemption back for season two.
5/12 update: NBC has cancelled The Blacklist: Redemption after one short season. Details here.

What do you think? Are you sorry that NBC has cancelled The Blacklist: Redemption TV show? Would you have watched a second season?

I thought the show was really good,Im tired of all the reality shows I want good drama,They made a big mistake canceling this show

I THINK THEY SHOULD CONTINUE WITH SEASON 2 AND SO ON .

We hope they will reconsider having a second season and more!

Loved Blacklist Redemption. Good plot and actors.. BRING IT BACK.

please bring it back ,that was the only show on thursday I looked forward too

IT wasn’t fabulous show! What are you thinking NBC??

Definitely will watch season 2. This is one of the best shows on TV. Can’t wait to see what happens next. Big mistake if you cancel.

Please renew for another season, for a spin-off they’re doing a great job…. Great proven characters, awesome team chemistry.
This deserves another season hands down.
Reminds me of a current day: Mission Impossible…….

would have happily watched series 2 .