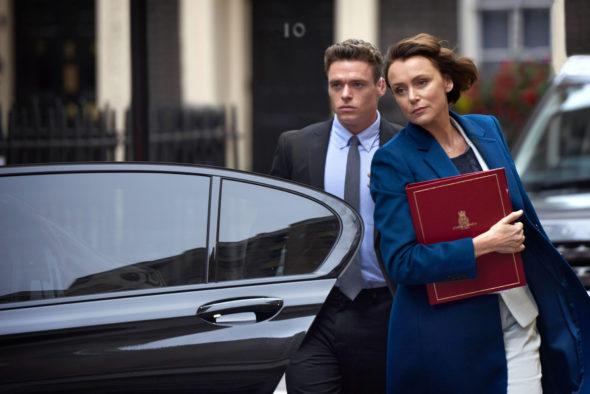 TV show description:
From creator Jed Mercurio, the Bodyguard TV show is a British crime drama. The thriller centers on an Afghanistan war veteran Sergeant David Budd (Madden), who is now working as a Specialist Protection Officer for the Royalty and Specialist Branch (RasP) of London’s Metropolitan Police Service. David is separated from his wife, Vicky (Rundle), who works as a ward sister (i.e. nurse) at a London hospital and is the mother of his two children

After he assists in thwarting a terrorist attack, Budd is assigned to protect Home Secretary Julia Montague (Hawes), who was a major proponent of the conflict in which he fought. Now the very life of this ambitious, powerful politician is in his hands.

As the story unfolds at the highest levels of government, David Budd finds himself torn between his sworn duty and his deepest beliefs. While Secretary Montague’s security is his job, he could prove a threat to her very safety.

Series Finale:
Episode #TBD
When Budd’s connection to the shooter is revealed, he becomes a police target. But his reunion with Chanel creates much more serious problems.
First aired: October 24, 2018.

What do you think? Do you like the Bodyguard TV series? Should this Netflix TV show have been renewed for a second season?

Bodyguard was wonderful. Must be a 2nd season. Madden was exceptional.

Bodyguard must come back. We loved it!

YES! The series should be renewed.
Julia Montague has to come back. Without her, there is no BodyGuard. Why? Actors Hawes and Madden sold that entire series. How? The dynamics between Hawes and Madden were excellent. And the 5 minute scene of Home Secretary Motague and PSO Budd during the assignation attempt where both Hawes and Madden were covered in her drivers brains and blood.

One of best shows on right now. Please continue!!

Terrific show. I hope it continues

Series should be renewed!

Love this series. Please renew. All my friends like it too.

Great show….. love it! Please do not cancel.

I enjoyed season one and should like to see more of this show, please do not cancel!

Great show and just want to make sure it is continued…Love the whole damn thing………..

Body Guard was/is a suspenseful miniseries; YES I would like to see it renewed.