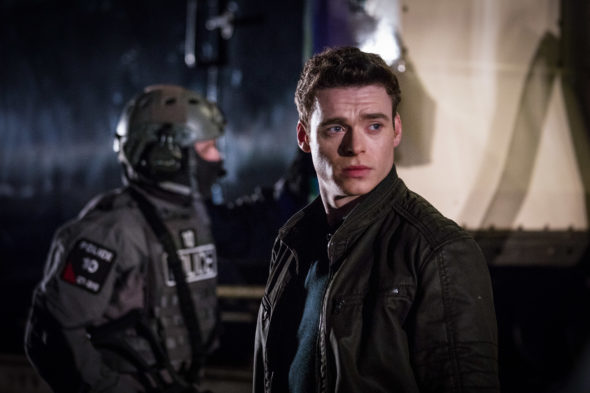 Is David Budd still on the case? Has the Bodyguard TV show been cancelled or renewed for a second season on Netflix? The television vulture is watching all the latest TV cancellation and renewal news, so this page is the place to track the status of Bodyguard, season two. Bookmark it, or subscribe for the latest updates. Remember, the television vulture is watching your shows. Are you?

Unless they decide to publicize viewership, it is difficult to predict whether Netflix will cancel or renew Bodyguard for season two. The series originally premiered on BBC One in August of 2018, so whether or not the British broadcaster decides to commission another installment is a significant piece of the cancelled-or-renewed puzzle. If BBC orders a second season, then Netflix has to determine whether the first one attracted enough viewers to pick it up. Assuming they do want to make another series (it did very well in UK), I think Netflix will renew it, because they have the global distribution rights, outside of UK and Ireland. Since that’s just speculation, I’ll keep an eye on the trades and press releases and update this page with breaking developments. Subscribe for free Bodyguard cancellation or renewal alerts.

What do you think? Do you hope the Bodyguard TV show will be renewed for a second season? How would you feel if Netflix cancelled this TV series, instead?

Yes, would love to see another seaso.

YES. I liked it vey much it is a great format. Where are the scriptwriters to write for this show.

I absolutely loved Bodyguard. Richard Madden is fabulous in this role. He has the deadpan look needed for this part. Please bring season 2. And more seasons after that. Not only did I finish watching season 1 but watched it a second time. I loved it just as much second time around.

Great show Please give us second season and more. I really loved it.

GREAT SHOW!! PLSE CONTINUE : GIVE US A SECOND SEASON & MORE!!!

Please renew!! We loved this show.

Please renew!! This show was excellent.