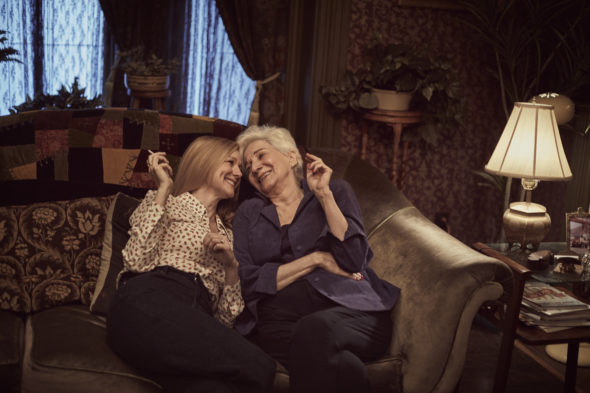 Dukakis, Linney, Garrick, and Gross reprise their roles from the original series, which unfolds in the mid-1970s centers on the lives of LGBT characters living in San Francisco. It follows midwesterner Mary Ann Singleton (Linney), who decides to remain in the city, after vacationing there, as well as Anna Madrigal (Dukakis), a trans woman who is the landlady at 28 Barbary Lane. In Further Tales of the City, Mary Ann marries former playboy Brian Hawkins (Gross).

In this Netflix revival, Mary Ann returns to San Francisco, 20 years after leaving Brian and daughter Shawna (Page). This time, she is on the run from her too-perfect life in Connecticut. It is not long before Anna is back in her life, along with the rest of Mary Ann’s chosen family. Can you go home again? Stay tuned.

Series Finale:
Episode #10 — Three of Cups
The conflict at Barbary Lane comes to a head. Jake and Margot clear the air. A night of celebration leads to an unexpected discovery in the morning.
First aired: June 7, 2019.


What do you think? Do you like Armistead Maupin’s Tales of the City TV series? Should this Netflix show be renewed for a second season?