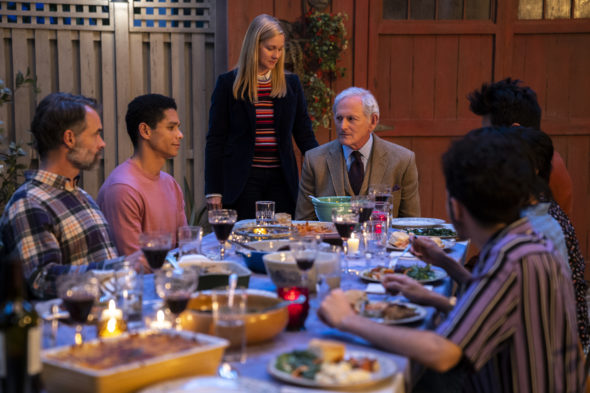 Is Mary Ann sticking around San Francisco? Has Armistead Maupin’s Tales of the City TV show been cancelled or renewed for a second season on Netflix? The television vulture is watching all the latest TV cancellation and renewal news, so this page is the place to track the status of Armistead Maupin’s Tales of the City, season two. Bookmark it, or subscribe for the latest updates. Remember, the television vulture is watching your shows. Are you?

A Netflix drama, Armistead Maupin’s Tales of the City is based on Maupin’s book series and stars Laura Linney, Olympia Dukakis, Barbara Garrick, Paul Gross, Ellen Page, Murray Bartlett, Charlie Barnett, Josiah Victoria Garcia, and May Hong. It is a revival or continuation of the series which first ran on UK Channel 4 and PBS in the U.S., and the two follow-ups which ran on Showtime. Dukakis, Linney, Garrick, and Gross reprise their roles from the original. The new series follows on Mary Ann (Linney) who, after 20 years, returns to her one-time chosen family in San Francisco. The stories charts the lives of LGBT characters and centers on life at 28 Barbary Lane, and pot-growing trans landlady Anna Madrigal (Dukakis).

Unless they decide to publicize viewership, it is difficult to predict whether Netflix will cancel or renew Armistead Maupin’s Tales of the City for season two. Usually, Netflix renews within a month or so, so if there’s good news, it shouldn’t take too long to get out. There’s a question of whether this is a “limited series” or a true “mini-series.” It has been billed as both.

There’s also the history of the franchise to consider. The 1993 original mini-series ran in the UK on Channel 4 and then on PBS in 1994. In 1998, Channel 4 and Showtime produced the sequel mini-series More Tales of the City. In 2001, Showtime also produced Further Tales of the City without Channel 4. This may be a one-and-done. It may be a one-and-done-for-now. It may return for another season in a year or so. Since it is anyone’s guess, I’ll keep an eye on the trades and press releases and update this page with breaking developments. Subscribe for free Armistead Maupin’s Tales of the City cancellation or renewal alerts.

What do you think? Do you hope Armistead Maupin’s Tales of the City TV show will be renewed for a second season? How would you feel if Netflix cancelled this TV series, instead?

I’ve BingeWatch this series over a weekend and was just totally hooked. I think it’s really good and it has so much that society needs to really look at and understand at a deeper level. I would love to see a second season that progresses and shows where the world has changed and learned acceptance for all beings