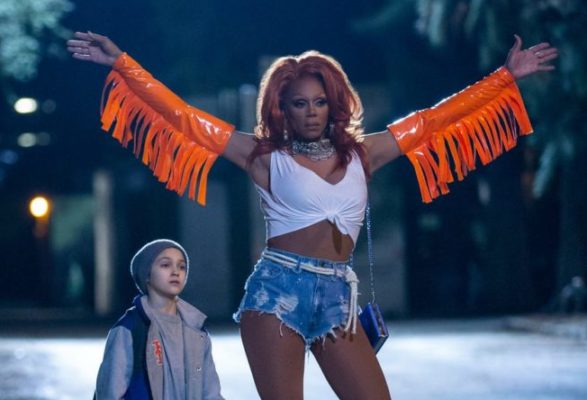 Can this odd couple learn from one another? Has the AJ and the Queen TV show been cancelled or renewed for a second season on Netflix? The television vulture is watching all the latest cancellation and renewal news, so this page is the place to track the status of AJ and the Queen, season two. Bookmark it, or subscribe for the latest updates. Remember, the television vulture is watching your shows. Are you?

Streaming on the Netflix subscription service, AJ and the Queen stars RuPaul Charles, Izzy G., Michael-Leon Wooley, Josh Segarra, Katerina Tannenbaum, and Tia Carrere. In the story, Ruby Red (Charles) is a bigger-than-life but down-on-her-luck drag queen. She travels across America from club to club in a rundown 1990’s R/V with her unlikely sidekick AJ (G.), a recently orphaned, tough-talking and scrappy 11-year-old stowaway. As the two misfits — one tall and one small — travel from city to city, Ruby’s message of love and acceptance winds up touching people and changing their lives for the better.

Unless they decide to publicize viewership, it is difficult to predict whether Netflix will cancel or renew AJ and the Queen for season two. Since Netflix isn’t ad-supported, it can take a chance on series it believes in and stories that need telling, but sooner or later it comes down to production costs, versus viewership numbers. Generally speaking, Netflix TV shows which are going to be renewed are usually picked up within a month or so of the series or season premiere. I’ll keep my ears open and an eye out for news, and will update this page with breaking developments. Subscribe for free alerts on AJ and the Queen cancellation or renewal news.

What do you think? Were you hoping that the AJ and the Queen TV show would be renewed for a second season? Are you sorry that Netflix cancelled this TV series, instead?

This show was phenomenal AND inspiring. I am extremely displeased Netflix cancelled this one. I learned a lot watching it…even my boyfriend was sucked in (against his will, at that!).RuPaul,, you are truly admired!!!! 10 stars

Please bring us a 2nd season it is dumb to cancel such a inspirational show!!!

Please bring show back for another season! I want to know what happens. The characters are so inspiring, interesting and fun! Please bring back!

I have to say, the kid got on my nerves, but I loved it. Was looking forward to another season.

Please bring this show back for season 2