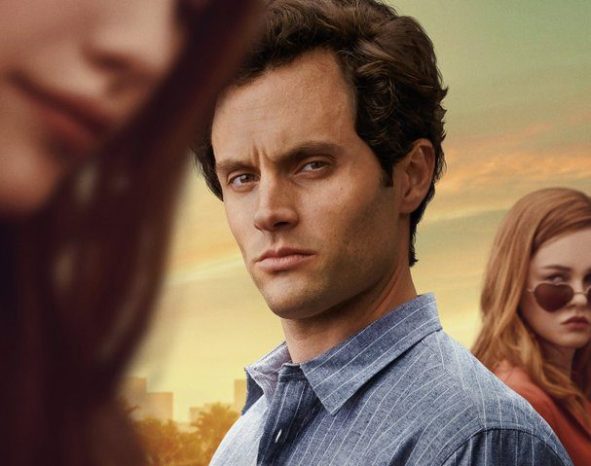 Can Joe Goldberg truly start over? Has the You TV show been cancelled or renewed for a third season on Netflix? The television vulture is watching all the latest cancellation and renewal news, so this page is the place to track the status of You, season three. Bookmark it, or subscribe for the latest updates. Remember, the television vulture is watching your shows. Are you?

Streaming on the Netflix subscription service, You stars Penn Badgley, Victoria Pedretti, Jenna Ortega, Janes Scully, Ambyr Childers, and Carmela Zumbado. Based on the Caroline Kepnes novel of the same name, the drama centers on NYC bookstore manager Joe Goldberg (Badgley) who became infatuated with aspiring writer and grad student Guinevere Beck (Elizabeth Lail). Season two finds Goldberg on the run from the horrors of his past. He settles in Los Angeles as “Will Bettelheim” and falls for Love Quinn (Pedretti), an aspiring chef and health guru. Can Goldberg truly escape his past or will history repeat itself?

Will Netflix cancel or renew the You TV series for a third season? Unless they decide to publicize viewership, it is difficult to predict a streaming show’s future however, this series may be a little different. In December 2019, it was announced that You would receive a sizable tax credit to film season three in California. This credit would reduce the cost of production and seems likely to mean that a renewal announcement is in the show’s future. I’ll keep my ears open and an eye out for news, and will update this page with breaking developments. Subscribe for free alerts on You cancellation or renewal news.

1/14/20 update: Netflix has renewed the You TV series for a third season.

What do you think? Do you hope the You TV show will be renewed for a third season? How would you feel if Netflix cancelled this TV series, instead?