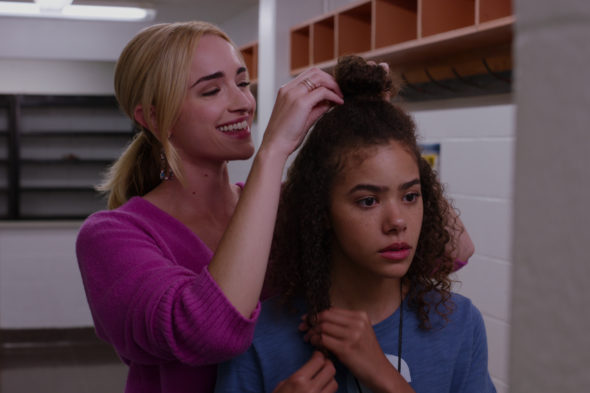 Can this family stick together? Has the Ginny & Georgia TV show been cancelled or renewed for a second season on Netflix? The television vulture is watching all the latest cancellation and renewal news, so this page is the place to track the status of Ginny & Georgia, season two. Bookmark it, or subscribe for the latest updates. Remember, the television vulture is watching your shows. Are you?

Streaming on the Netflix subscription service, the Ginny & Georgia TV show stars Brianne Howey, Antonia Gentry, Diesel La Torraca, Jennifer Robertson, Felix Mallard, Sara Waisglass, Scott Porter, and Raymond Ablack. The story revolves around awkward Ginny (Gentry), a 15-year-old who is more mature than her dynamic 30-year-old single mother, Georgia (Howey). With nine-year-old son Austin (La Torraca) and Ginny in tow, Georgia relocates the family to a picturesque New England town in order to give her kids a better life than she had. Her past threatens to upset these idyllic plans.

Unless they decide to publicize viewership, it is difficult to predict whether Netflix will cancel or renew Ginny & Georgia for season two. Since Netflix isn’t ad-supported, it can take a chance on series it believes in, but sooner or later it comes down to production costs, versus viewership numbers. I think that this one will likely be renewed but, I’ll keep an eye out for news and will update this page with breaking developments. Subscribe for free alerts on Ginny & Georgia cancellation or renewal news.

4/19/21 update: Ginny & Georgia has been renewed for a second season on Netflix.

What do you think? Are you glad that the Ginny & Georgia TV show has been renewed for a second season? How would you feel if Netflix had cancelled this TV series, instead?