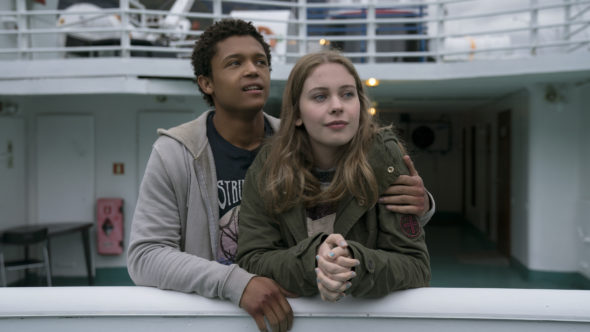 Is this the end of the innocence? Has The Innocents TV show been cancelled or renewed for a second season on Netflix? The television vulture is watching all the latest TV cancellation and renewal news, so this page is the place to track the status of v, season two. Bookmark it, or subscribe for the latest updates. Remember, the television vulture is watching your shows. Are you?

Unless they decide to publicize viewership, it is difficult to predict whether Netflix will cancel or renew The Innocents for season two. For now, I’ll keep an eye on the trades and press releases and update this page with breaking developments. Subscribe for free alerts on The Innocents cancellation or renewal news.

3/15/19 update: Netflix has reportedly cancelled The Innocents TV show so there won’t be a second season.

What do you think? Were you hoping that The Innocents TV show would be renewed for season two? Are you sorry that Netflix cancelled this TV series, instead?

Loved this show. There should definitely be a season two

Please show season 2 it was a great series

Can’t believe I started watching this show without checking to see if there were additional seasons! It’s a really great show with lots of unexpected plot twists and I’m really disappointed it’s been cancelled.

We just finished this series. We are so disappointed to see that it’s been cancelled. Such a great show!!

They can’t just cancel a remarkable series like this….I am really expecting a season 2 cause I’ll like to know what happens next

This is really hurting to hear that it’s been cancelled

I hope Netflix doesn’t cancel the innocents. The first season was great in my opinion and we have to find out if harry is going to stay like that or not!!!!!!

They can’t do that I want to know what happens to all of them it’s a great show.