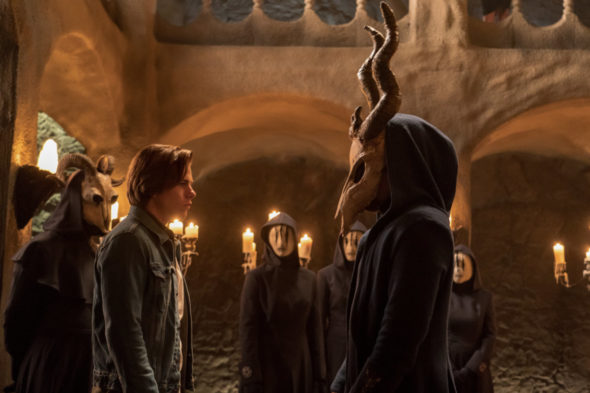 Has Netflix ordered up another magical season? Is The Order TV show cancelled or renewed for a second season on Netflix? The television vulture is watching all the latest TV cancellation and renewal news, so this page is the place to track the status of The Order, season two. Bookmark it, or subscribe for the latest updates. Remember, the television vulture is watching your shows. Are you?

A campy Netflix horror drama, The Order stars Jake Manley, Sarah Grey, Matt Frewer, Sam Trammell, and Max Martini. The series unfolds at the fictional Belgrave University and centers on freshman Jack Morton (Manley), a new initiate into the Hermetic Order of the Blue Rose. Although Jack’s father, Edward Coventry (Martini) is Grand Magus of the Order, Jack’s real motive in joining the magic society is to avenge the death of his mother. As he digs into his family’s secrets, Jack discovers a secret war between the Order and the Knights of Saint Christopher — werewolves who dedicate themselves to combating the dark arts.

Unless they decide to publicize viewership, it is difficult to predict whether Netflix will cancel or renew The Order for season two. For now, I’ll keep an eye on the trades and press releases and update this page with breaking developments. Subscribe for free alerts on The Order cancellation or renewal news.

3/28/19 update: Netflix has renewed The Order for a second season.

What do you think? Are you glad that The Order TV show has been renewed for a second season? How would you feel if Netflix had cancelled this TV series, instead?

The show is interesting. It does need more. Werewolves and magic users have been done a lot. Add other creatures. There is a host of super natural creatures that could make the show even better. Have some other groups enter that make the magic users a small piece, not the entire focus of the show. Make it a part of the new addition that these other communities-Schools are trying to steal students from the Order and the knights. After all seeking more power is part of the goal of the show. I am not at all trying to add vampires.… Read more »

Please renew for season 2. This is a awesome show. Leaves you on the edge of your seat. Although i didn’t like how you ended season 1. And why and how is that claw hand treacherous one still alive

Please make a new season I loved it so much

Make a new season I loved it

Do another season – please !

I need to know what happens to the Knights and why they saved the book !!!

I am hooked. Not ok if there is no second season.

I hope they add a season 2!! The story got really great at the end and it leaves so many possibilities. Many first seasons take a little steam to boost! Please.. SECOND SEASON!!

I really love this show (it’s one of my favourites with just 10 episodes!!) and I would be devastated if they ended it because it has so much potential to be the next hit!! I love the characters so much please don’t make it end on the werewolves losing everything they worked hard to get and their memories!

We just finished season 1. Loved it! Would love to see a second season come out.

I enjoyed this, I can see a great future for this show, it’s a good take on the genre.

I really enjoyed the show and thats saying something when I really disliked the whole Twilight frenzy not so long ago! It was quirky in a good way and bar the whole werewolf and magic stuff reminded my of my own university days (in England). Like a good book getting to the end is like losing a friend so hopefully there will be a new chapter. I did think the ending was a little weak, like characters all waking up from a dream cliché, but if there is to be a season 2 I suppose it does set things up… Read more »

I would be heartbroken if Netflix cancelled this show I’m really hoping for not just a season 2 but maybe even a season 3,4,5 there is so much potential to work with; with this series and it could become a hit. I have some ideas if Netflix needs some ideas.

I too hope athe Order continues. I really liked it, the characters, the actors and the story line. D
Please dont cancel another one of the shows on Netflix that I love!