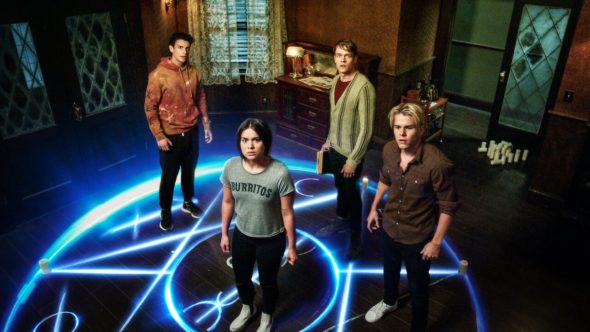 Scary news for fans of The Order TV series. Netflix has cancelled the campy horror drama series so there won’t be a third season. Series creator Dennis Heaton broke the news on Twitter.

The Order stars Jake Manley, Sarah Grey, Louriza Tronco, Adam DiMarco, Devery Jacobs, Thomas Elms, and Katharine Isabelle. The series begins at the fictional Belgrave University and centers on freshman Jack Morton (Manley), a new initiate into the Hermetic Order of the Blue Rose. Although Jack’s father, Edward Coventry (Martini), is Grand Magus of the Order, Jack’s real motive in joining the magic society is to avenge the death of his mother. As he digs into his family’s secrets, Jack discovers a secret war between the Order and the Knights of Saint Christopher — werewolves who dedicate themselves to combating the dark arts. In the second season, The Knights struggle to regain their memories stolen from them by The Order and they crave retribution. But vengeance is hard to plan when you’re also fighting murderous magicians, strange new cults, and life-threatening demons.

Revealing that the show had been cancelled, series creator, writer, and executive producer Heaton wrote, “For two seasons I was honored to work with an incredible cast and crew on The Order for Netflix. It is one of the best experiences of my career. Unfortunately, we aren’t returning, but I will always cherish the memories and the props I stole. Thank you all for watching.”

To help give viewers some closure, Heaton added, “PS – Jack was totally going to raise Alyssa from the dead, but she was going to come back wrong. Like, Pet Sematary wrong. Probably possessed by Zecchia. And a whole bunch of other corpses were coming back with her.” When a viewer inquired about Vera’s magic, Heaton replied, “That was going to be a longer haul, but she’d get it back. And god help us all…”

What do you think? Did you enjoy The Order TV series on Netflix? Were you looking forward to watching a third season?

Boo! The show was great and the writing, fantastic! I needed to see love triumph over evil and the order used as a tool for good. I love all the characters! Great storytelling! Such a shame.

I loved the show. It was well written, loved the humor thrown in and I loved the tension between Alyssa and Jack. As usual anything good gets cancelled…that sucks!!!

It was campy but I loved both seasons. A shame it’s been canceled

I have been looking forward to season three ao The Order. Sad to hear it is not coming back. Sounds like The Chilling Adventures of Sabrina. Anyone else seeing a pattern here?

Good news, it was a talking show.

The first 2 seasons had a nice zest about them. And dry-witted humor too. Absolute shame it has to end this way. It certainly was deserving a 3rd (and final) season. And with a 10 episodes per season schedule so common nowadays, how much would such a season have cost Netflix? Stories don’t have to be dragged on for years. As long as there is a proper start and finish, either on a positive or negative note (courtesy of the team behind it), I have no problem with 1 season or 2 season wonders. Heck, sometimes less is more. “The… Read more »