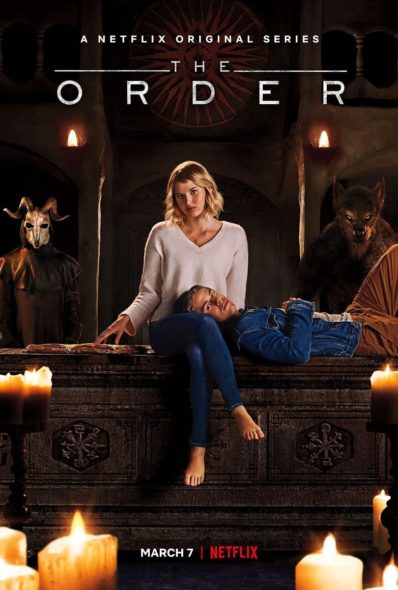 How magical is the first season of The Order TV show on Netflix? As we all know, the Nielsen ratings typically play a big role in determining whether a TV show like The Order is cancelled or renewed for season two. Netflix and other streaming platforms, however, collect their own data. If you’ve been watching this TV series, we’d love to know how you feel about The Order season one episodes. We invite you to rate them for us here. *Status update below.

A campy Netflix horror drama, The Order stars Jake Manley, Sarah Grey, Matt Frewer, Sam Trammell, and Max Martini. The series unfolds at the fictional Belgrave University and centers on freshman Jack Morton (Manley), a new initiate into the Hermetic Order of the Blue Rose. Although Jack’s father, Edward Coventry (Martini) is Grand Magus of the Order, Jack’s real motive in joining the magic society is to avenge the death of his mother. As he digs into his family’s secrets, Jack discovers a secret war between the Order and the Knights of Saint Christopher — werewolves who dedicate themselves to combating the dark arts.

What do you think? Which season one episodes of The Order TV series do you rate as wonderful, terrible, or somewhere between? Should Netflix cancel or renew The Order for a second season? Don’t forget to vote, and share your thoughts, below.

3/28/19 update: Netflix has renewed The Order for a second season.

I enjoyed the first 5 episodes and after that I was hooked. Well done and I would definitely love a second season.

My sister and I, really enjoyed the show. There was many real references to ancient Greek and Latin words, renaisance type witchcraft, etc… Kudos to the writers who did their reasearch on this things to keep it authentic.
We totally want this show to come back for season 2!

Usually It is difficult I were really hooked on a series, The Order is one of this little group. I am looking forward the second season of this show.

I really loved this show.I hope it will be renewed for a second season.I really don’t want a good show like “The Order” to cancel

Loved this show I hope there are many more episodes to come .please do not cancel !

Look I didnt mind it. A plot about revenge, family and power and what people do with it, becomes a College Horror type movie with Werewolves. Its the end that does it for me. All of the werewolves get dosed with a memory eraser dust thing because they know.. too much? The order who they have been working with takes their stuff but leaves them alive… because?. Even the main character has his complete memory erased to the point that he essentially forgets his entire existence, his girlfriend and even his own name.. yet is still a Werewolf (are we… Read more »

I fully agree with almost everything you said. Im not sure if the finale will make people dislike the series as a whole but I was also totally let down by the way the season ended!! I hope it was all for a reason (the memory wipes) if there is a second season, but I was disappointed with it and the Knights’ reliquary being ransacked. I think my favorite part of the show were the Knights of Saint Christopher and the story and structure behind the werewolves and to see them lose literally everything but their lives was rough.

The memory being erased makes the viewers(us) more curious & exited about how they will find out about the order again and meet each other again,maybe the erasing of their memory could be the beginning of the show.I think a season 2 would come because the wolves don’t remember and the Vane Book still exists ,it is not destroyed,so season 2 would therefore be great.

I disagree, the ending made me wish I never watched the show