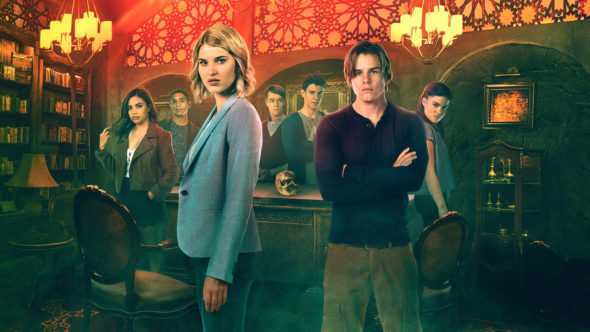 TV show description:
From creators Dennis Heaton and Shelley Eriksen, The Order TV show is a campy campus horror series, which unfolds at the fictional Belgrave University. The story centers on freshman Jack Morton (Manley), a new initiate into the Hermetic Order of the Blue Rose. Although Jack’s father, Edward Coventry (Martini) is Grand Magus of the Order, Jack’s real motive in joining is to avenge the death of his mother — at the urging of the working class grandfather (Frewer) who raised him.

A beautiful sophomore, Alyssa Drake (Grey), is not just Jack’s orientation leader, she’s also his mentor in the Order — his tour guide into this mysterious magical world, replete with monsters. On the hunt for his family’s secrets, Jack discovers a secret war between the Order and the Knights of Saint Christopher — werewolves who dedicate themselves to combating the dark arts.

Series Finale:
Episode #20
After having their memories wiped, Vera plans to induct the Knights into the Order, but they prove to be hard to control.
First aired: June 18, 2020.

What do you think? Do you like The Order TV series? Should this Netflix TV show have been cancelled or renewed for a third season?

Could have at least filmed a series finale

Love this show – they should definitely continue it !!!!!

This series is incredibly addicting. A perfect mix between magic and werewolves, all seasoned with an amazing sentimental drama between the protagonists united by feelings but belonging to opposing sides. I hope a second season is done otherwise I cancel subscription to Netflix …… ahaha

I really like this seris but Jack and Alyssa love should not be ended or Jack’s involvement in the blue rose order.
I did not agree with ending it is like everything ended
Really want to see a season 2
Thank you

I really hope there is another season! This is a great show but the ending of season 1 was awful. There has to be more than this!

I like the show I wish there be a second season it was good . It had a great storyline it will be fun to see what they do in a second season. I did not like them getting powered at the end. But we will see. Please make season two

Wow, can’t believe that there are only two comments! Either the show is not being watched or nobody comes to this site. I hope it is the second. It looks like the show has been renewed and we will get the treat of watching a second season. I am kind of sad that they killed Matt Frewer, but excited and intrigued by what might happen next. Yes the show is a little low budget and campy, but it is funny and original and well acted. Well work watching and talking about.

The Orser Definitely should be renewed for a season 2