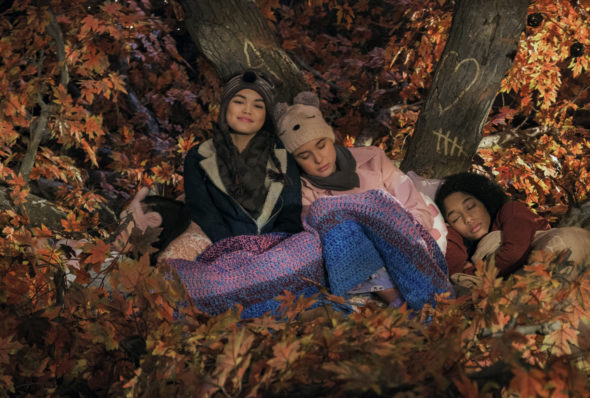 TV show description:
From creator Heather Wordham, with showrunner Matthew Carlson, the Alexa & Katie TV show is a live-action, multi-camera sitcom aimed at tweens and young teens. The comedy centers on Alexa Mendoza (Berelc), who is undergoing treatment for cancer, just as she is about to enter her freshman year of high school.

Outgoing and enthusiastic, despite her diagnosis and treatment, Alexa loves life out loud. With her unique yet steadfast best friend, Katie Cooper (May), at her side, Alexa refuses to let her spirit falter.

At a time when going along with the pack seems to be the order of the day, sometimes Alexa and Katie feel a bit adrift. Still, their friendship both rules and saves the day, whether they’re at home, school, or at the hospital.

Along for the ride is Alexa’s lion-hearted mother, Lori (Thiessen), as well as dad, Dave (Shin), and brother Lucas (Kelly). Rounding out the gang is Katie’s mom, Jennifer (Jenkins), and little brother Jack (Carr). The series explores the importance of female friendships in the modern age.

Series Finale:
Episode #39 — This Feels Right
The girls are finally graduating from high school and getting ready to leave home for college. But, will they stay together or go their separate ways?
First aired: June 13, 2020.

What do you think? Do you like the Alexa & Katie TV series? Should this TV show have been renewed for a fourth season on Netflix?

We love this show. Real life. Portrays the role of friendships, and family. This is a show that I feel comfortable letting my granddaughter watch. Please renew.

We love this show. My entire family can watch together. My five year old connects as much as my 15 year old. Great acting and teaching important lessons.

I love this o.mg this is a good show 4 everyone not just kids but everyone it should be shown to kids that hoimg threw cancer in hospitals and home awsome show I love love this show☺.

Truly dreadful in every way. Again we see the use of fake canned laughter to attempt to prop up a very poor script.