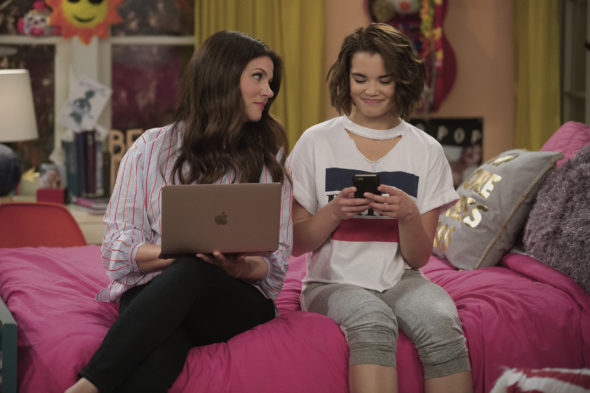 Alexa Mendoza and Katie Cooper shall return! Netflix has renewed the Alexa & Katie TV show for a third season. According to the press release, season three will consist of 16 episodes, split into two eight-episode parts. The release date is still TBD.

A Netflix multi-camera comedy, Alexa & Katie stars Paris Berelc, Isabel May, Tiffani Thiessen, Eddie Shin, Jolie Jenkins, Emery Kelly, and Finn Carr. The sitcom centers on Alexa Mendoza (Berelc), a high school student undergoing treatment for cancer. Outgoing and enthusiastic, despite her diagnosis and treatment, Alexa loves life out loud. With her unique yet steadfast best friend, Katie Cooper (May), at her side, Alexa refuses to let her spirit falter.

Check out the Netflix press release.

Netflix has renewed multi-cam sitcom Alexa & Katie for a third season of 16 episodes.

The series follows two lifelong best friends on their journey as they face not only the challenges of high school but also the lingering complexities of Alexa’s battle with cancer.

Season 3 will follow Paris Berelc (Alexa) and Isabel May (Katie) through their junior and senior years of high school as they learn that together, they can get through anything.

The third season of Alexa & Katie will launch in two parts featuring eight episodes each.

What do you think? Are you a fan of the Alexa & Katie TV series? Do you plan to stream the third season of this Netflix TV show?

My daughter started me watching the show and as a parent I’m honored to say this is one of favorite shows on Netflix. It deals with real life issues and is an AMAZING example for a positive, goal-driven, age-appropiate FRIENDSHIP! I commend the writers!!!! They’re giving our children “positive influence” again.

So happy to learn of the renewal. Love the show and how it deals with issues.

I love that show so glad there is a season three