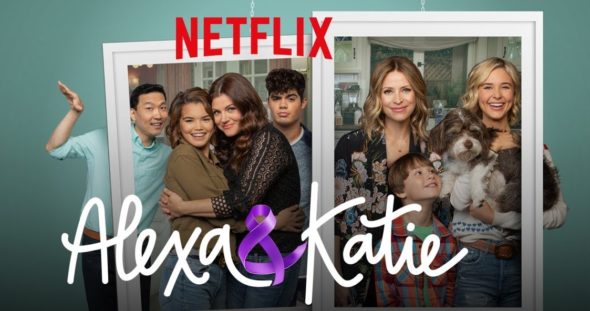 What changes will junior year bring? Has the Alexa & Katie TV show been cancelled or renewed for a fourth season on Netflix? The television vulture is watching all the latest cancellation and renewal news, so this page is the place to track the status of Alexa & Katie, season four. Bookmark it, or subscribe for the latest updates. Remember, the television vulture is watching your shows. Are you?

Unless they decide to publicize viewership, it is difficult to predict whether Netflix will cancel or renew Alexa & Katie for season four. Since Netflix isn’t ad-supported, it can take a chance on series it believes in, but sooner or later it comes down to production costs, versus viewership numbers. I suspect that the show will be renewed for a fourth (and perhaps, final) season. Generally speaking, Netflix TV shows which are going to be renewed are usually picked up within a month or so of the series or season premiere. I’ll keep my ears open and an eye out for news, and will update this page with breaking developments. Subscribe for free alerts on Alexa & Katie cancellation or renewal news.

What do you think? Were you hoping the Alexa & Katie TV show would be renewed for a fourth season? How do you feel that Netflix cancelled this TV series, instead?

I feel bad because these two girls had a sad story,but this show was targeted at teenagers and tweens.

Unfortunately season 3 is the last. I know it sucks.

PLEASE PLEASE PLEASE have a season 4 all i have done during quarantine is watch Alexa and Katie over and over even though i know what’s gonna happen. So all i ask is a season 4 and a lot more seasons lots of love Robyn

Please don’t cancel Alexa & Katie! It is a great show, very entertaining for all ages

I love Alexa and Katie please don’t cancel it

I would love for there to be a season 4 and maybe more, but if Netflix cancelled the show I would be devistated it’s the best show I’ve ever watched so please keep this show going !

I love Alexa and Katie

I would so hate if they canceled the TV show