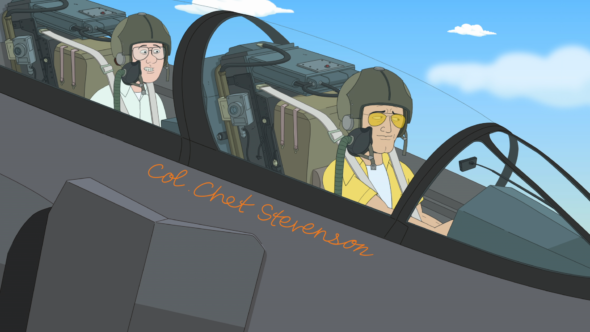 What’s going on with the ineffable Frank Murphy and family? Has the F Is for Family TV show been cancelled or renewed for a fourth season on Netflix? The television vulture is watching all the latest TV cancellation and renewal news, so this page is the place to track the status of F Is for Family, season four. Bookmark it, or subscribe for the latest updates. Remember, the television vulture is watching your shows. Are you?

A Netflix animated black comedy, F Is for Family comes from creators Bill Burr and Michael Price. Burr voices the male lead, Francis X. Murphy (aka Frank), as well as Father Patt. The voice cast also includes Laura Dern, Justin Long, Haley Reinhart, Debi Derryberry, Sam Rockwell, Mo Collins, Trevor Devall, and Phil Hendrie. The sitcom unfolds in 1970s Pennsylvania, where embittered Korean War veteran Frank plies his trade as a baggage handler at Mohican Airlines and, along with wife Sue (Dern) is raising his family. The three Murphy kids, Kevin (Long), Maureen (Derryberry), and Bill (Reinhart), are coming of age in the days where you could smoke cigarettes inside, and parents didn’t hover over their kids.

Unless they decide to publicize viewership, it is difficult to predict whether Netflix will cancel or renew F Is for Family for season four. For now, I’ll keep an eye on the trades and press releases and update this page with breaking developments. Subscribe for free F Is for Family cancellation or renewal alerts.

1/24/19 update: Netflix has renewed F Is for Family for a fourth season.

What do you think? Are you glad that the F Is for Family TV show has been renewed for a fourth season? How would you feel if Netflix had cancelled this TV series, instead?

This show was great. Not usually a fan of cartoon shows, but this is almost as if In not watching cartoon characters. It’s TRUE to life and doesn’t hold back. I absolutely love it and it had me laughing outloud watching by myself which is a rarity that a dramedy will get me to do that. I’m glad I gave it a chance and watched the first episode because after the first few minutes I was hooked. There has to be plenty more material for not just another season, but several seasons beyond that. Please keep the episodes coming. Philly,… Read more »

It’s an amazing show and should be continued