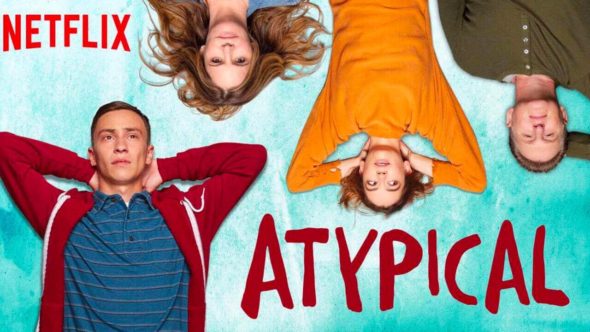 Will Sam find happiness in his independence? Has the Atypical TV show been cancelled or renewed for a fourth season on Netflix? The television vulture is watching all the latest cancellation and renewal news, so this page is the place to track the status of Atypical, season four. Bookmark it, or subscribe for the latest updates. Remember, the television vulture is watching your shows. Are you?

Streaming on the Netflix paid subscription platform, Atypical stars Keir Gilchrist, Jennifer Jason Leigh, Michael Rapaport, Brigette Lundy-Paine, Nik Dodani, and Jenna Boyd. This coming of age series centers on Sam (Gilchrist), a young man on the autism spectrum who’s now a freshman in college. He grapples with new challenges, from making friends to managing his schedule. When Sam decides to get a girlfriend, his bid for more independence puts his whole family (Leigh, Rapaport, and Lundy-Paine) on a path of self-discovery.

Unless they decide to publicize viewership, it is difficult to predict whether Netflix will cancel or renew Atypical for season four. Since Netflix isn’t ad-supported, it can take a chance on series it believes in and stories that need telling, but sooner or later it comes down to production costs, versus viewership numbers. That being said, few Netflix series last more than a couple of seasons. Netflix TV shows which are going to be renewed are usually picked up within a month or so of the series or season premiere. For now, I’ll keep my ears open and an eye out for news, and will update this page with breaking developments. Subscribe for free alerts on Atypical cancellation or renewal news.

2/24/20 update: Netflix has renewed Atypical for a fourth season.

What do you think? Are you glad that Atypical TV show has been renewed for a fourth and final season? How would you feel if Netflix had cancelled this TV series, instead?

Glad it’s been renewed for a 4th season. GREAT show!

Guys!! As of 4 hours ago on February 24 (12pm Pacific time, 3pm Eastern time) it was just confirmed that the show will be renewed for a 4th and final season!! Check out Brigette Lundy-Paine’s Instagram announcement here: https://www.instagram.com/p/B89HcWDl0JF/
(Also confirmed by the Atypical Netflix official Instagram account here: https://www.instagram.com/p/B89C9oEgLdB/)

I have been waiting for this announcement for 4 months, congrats guys!!

I really hope Netflix renews this show for a 4th season!

Hope its not finally cause I am gushing for more

This show is badly made

This show is pretty close to perfect. Please do not cancel it. The writing, direction and acting are so well done. Everything is so well done.

My husband and I enjoy atypical and hope it is not cancelled. I believe the portrayal of a young adult with Aspergers is much more accurate than The Good Doctor.

I will be heartbroken if Netflix doesn’t bring Atypical back for season 4!! I love the show and all the actors!!

I might seriously discontinue my Netflix subscription if they cancel Atypical. It’s my favorite show

Is there anyway for average viewer to influence whether Netflix will renew this? One of my favourite shows ever.