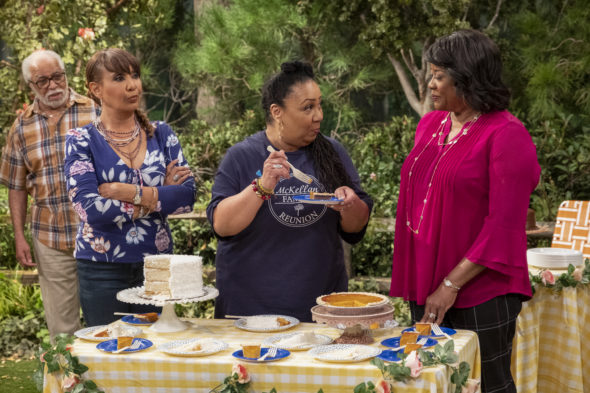 Will the McKellan family stick together? Has the Family Reunion TV show been cancelled or renewed for a second season on Netflix? The television vulture is watching all the latest TV cancellation and renewal news, so this page is the place to track the status of Family Reunion, season two. Bookmark it, or subscribe for the latest updates. Remember, the television vulture is watching your shows. Are you?

Unless they decide to publicize viewership, it is difficult to predict whether Netflix will cancel or renew Family Reunion for season two. Recently, although the streamer has been quicker to cancel shows than it was in its early days, when it is going to renew, Netflix usually does so pretty quickly. If the news is good, we’ll likely hear in a month or so. Until we know its fate, I’ll keep an eye on the trades and press releases and update this page with breaking developments. Subscribe for free Family Reunion cancellation or renewal alerts.

*9/17/19 update: Netflix has renewed Family Reunion for a second season.

What do you think? Are you glad that the Family Reunion TV show has been renewed for a second season? How would you feel if Netflix had cancelled this TV series, instead?

Love this Show, it was funny and family oriented. The characters are great. Please bring it back for Season 2.

Yes please have a second season of family reunion on Netflix!! This is a great family show!!

Excited for a season 2 of family reunion

I am excited for a season 2 of family reunion