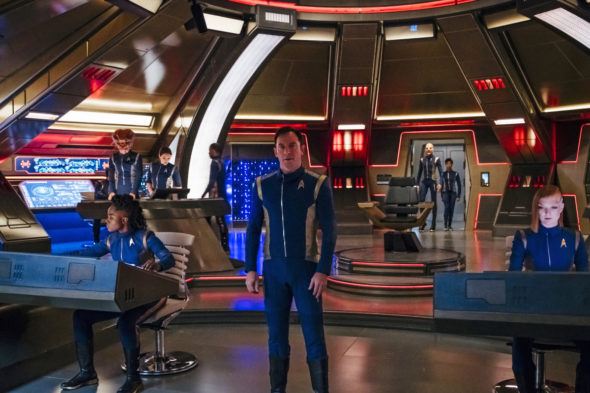 Due to production delays of its regular shows, CBS has decided to air the first season Star Trek: Discovery on broadcast television. CBS All Access has already released the second season and season three is coming on October 15th. Will the network air these future seasons of Discovery at some point if the ratings for the first season are strong enough or, will they remain behind a paywall? Stay tuned.

2/5 update: You can see the latest night’s ratings in context.

Note: On September 24, 2017, the night that Star Trek: Discovery launched on CBS All Access, CBS aired the first episode and attracted a 1.9 in the demo with 9.49 million viewers. While the 2020 airing of the first episode is technically a rerun, we’re including it in the chart because the initial airing was three years ago.

What do you think? Do you like the Star Trek: Discovery TV series? Are you hoping that CBS will air future seasons on regular television?

I absolutely love STD, hopefully it never goes, they have great actors on there n great storylines but not all the gay stuff, doesn’t interest me at all but Love the show. Keep up the awesome show

I am largely turned away from this because the characters are not engaging, way too involved in being “correct”, not enough adventure, too much emoting by the most unlikeable character, Burnham. Anson Mount was a superior Capt. Pike and I would watch any show he’s in. Doug Jones is very good in his role. The rest? Meh. I doubt I’ll watch the upcoming season: I’m really tired of being beaten over the head with how PC everyone is, to the exclusion of interesting stories.

Will this be the first ABC show to reach zero ratings before it’s cancelled?

ok, so being a Star Trek Next Generation, Voyager, & Deep Space Nine freak, I gave it 5 episodes to grab me rather then the usual one or 2 that I give a new show. Im sorry, this show is SOOOO boring!! And not ONE of the characters are likeable!! Not one! Sadly, I deleted my timer today. Gene is probably rolling over in his grave! I cant believe how you ruined a wonderful franchise! Hopefully they will cancel it on CBS and leave it for those suckers who actually pay for that CBS all access…

This would have much higher ratings, in fact could be a hit, if it was made for fans instead of a screaming minority. A minority who don’t watch the show.

I enjoy watching STAR TREK: DISCOVERY on my tv instead of my iPad.

Stop remaking Star Trek will be forever William Shartner is best Captain Kirk. Original series from 60 years old. Only 25 years old love classics don’t care too many keep up with.

This is a poor debut, I know it has been on CBS All Access but they have a relatively small user base. 1.7 on CBS with a .2 rating? There have been indications Discovery has not really been doing well, but this is first time you can really get to see where it is really sitting among shows. It was one of the lowest rated shows that night, was only able to beat out CW reruns.

I was so excited when Star Trek came back on, that I blindly signed up to CBS All Access. By the 3rd episode I realized the mistake I made. I want Star Trek to be successfull, but I am just not into any of the new shows. CBSAA was cancelled. You will have to see it and judge for yourselves. Maybe Paramount + will fix Star Trek, at least add better content to justify subscribing to that streaming service. Netflix and a Hulu +, Disney +, Espn + bundle is more than enough for my Sci-fi needs.

The first episode was fairly good. It will be interesting to see the progression. We will watch again.

I hope that Star Trek Discovery will be a hit.

3rd season is starting, we already know that it’s not a hit.

Its not and it wont. Season three is the last one. Netflix bailed out on it. And the studio can not finance season four. No one else will.