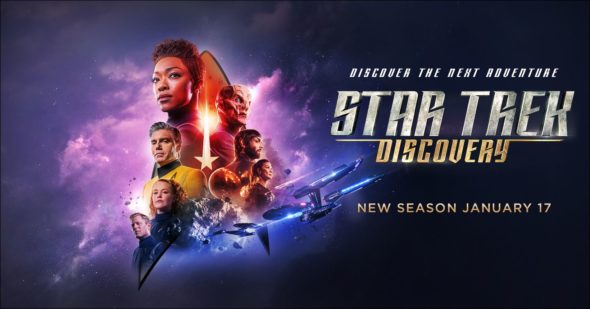 A CBS All Access sci-fi drama, Star Trek: Discovery stars Sonequa Martin-Green, Doug Jones, Shazad Latif, Anthony Rapp, Mary Wiseman, Wilson Cruz, Anson Mount, Mary Chieffo, Tig Notaro, Ethan Peck,  Rebecca Romijn, and Michelle Yeoh. A prequel to Star Trek: The Original Series, the series follows the crew of the USS Discovery, during the cold war between the Federation and the Klingons. In the season two, after answering a distress signal from the USS Enterprise, the Discovery crew joins forces with Captain Christopher Pike to investigate seven mysterious red signals and the appearance of a being called the Red Angel. Meanwhile, Commander Michael Burnham (Martin-Green) must face her past, with the appearance of her estranged brother — Spock.

What do you think? Which season two episodes of the Star Trek: Discovery TV series do you rate as wonderful, terrible, or somewhere between? Should CBS All Access cancel or renew Star Trek: Discovery for a third season? Don’t forget to vote, and share your thoughts, below.

*2/27/19 update: CBS All Access has renewed Star Trek: Discovery for a third season.

It has brilliant moments of story telling, cursed by cringe dialogue and force-fed SJW ethics. Even Enterprise is far better.

I only have CbS all access so that I can watch Star Trek Discovery. Nothing else on there piques my curiosity.

Yes! As soon as I found out Star Trek Discovery was on I got CBS All Access. Initially I only watched Discovery but other shows have grown on me as well such as FBI, Seal Team, The Code, and SWAT. However, what keeps me on CBS All Access is Star Trek Discovery along with the upcoming Star Trek: Picard and other STAR TREK spinoffs. Just wish they did DS9 season 8 or a DS9 spinoff that is directly related to where DS9 left off.

Disco is great, Burnham deserves an emmy, Klingons are wow ! , plot is superwow ! and this comment written from a parallel universe version of me . WAKE UP and cancel now this flummery called disco !!!

9.4/10? Seriously? There is NO WAY those “votes are from actual fans of star trek! CBS when are you going to learn, doing this isn’t fooling anyone! Your subscriptions are flatlining, and the REAL scores are on Youtube! If these were genuine, how come you had to release them for free on a competitor? Sooner this abomination is cancelled the better! All of the writers and showrunners need to v=be run out of the industry.

Honestly who cares if the votes are accurate or not. What matters is the Star Trek Discovery fans will get what they want and be able to see a third, fourth and fifth season. That’s all that I think really all care about.