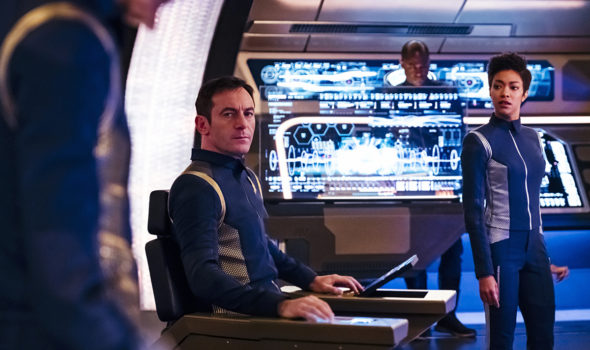 The newest installment in the Star Trek franchise takes place 10 years before the original series and follows “the voyages of Starfleet on their missions to discover new worlds and new lifeforms, and one Starfleet officer who must learn that to truly understand all things alien, you must first understand yourself.” The cast includes Isaacs, Mary Wiseman, Sonequa Martin-Green, Rainn Wilson, Doug Jones, Anthony Rapp, Michelle Yeoh, and James Frain.

In the interview, Isaacs said he doesn’t want cameos from original Star Trek series stars like William Shatner because it would be too distracting for viewers:

Someone asked which cast members from the existing series would you like to guest star – I think people watch good drama shows and they completely suspend their disbelief, they feel like they’re looking through the keyhole at another world, if you do it well enough.

If you have stunt celebrity cameo casting, it completely pulls them out of it. They feel like they’re watching a Saturday Night Live sketch.”

So I just hope people believe our stories, are engaged with them, and I’m happy to meet Will Shatner in real life in a restaurant.”

What do you think? Are you a Star Trek fan? Do you think stars from the original series should have a cameo on the Discovery?

He’s entirely right, it devalues the great work they’re doing and just becomes a cheap move. It was relevant for the other iterations but also made for a poor finale for Enterprise.
This deserves a fresh perspective to move away from the already excessive criticism by “die hard fans” and hold its own

I see where he is coming from and I agree no Shatner or Kirk at all. But you can’t mention the Enterprise and show Christopher Pike on the display in two seperate episodes and not have both make an appearance. Especially during a massive war.

I would agree with Isaacs. However, let’s not confuse cameos in terms of the actual actors (Shatner, Pine et al) with characters (Kirk, Spock etc). If introduced effectively, there’s no reason that wouldn’t work well.

Apart from Easter Eggs, and those should be subtle, the series should be able to build its own followers and not rely on past loves.