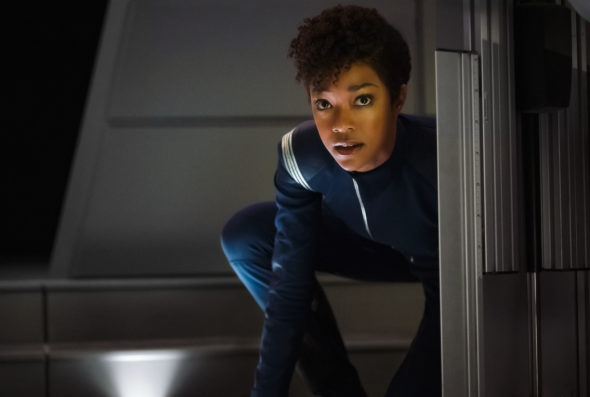 Star Trek: Discovery is a hit. TrekMovie reports the new TV show has broken records for CBS All Access.

The newest installment in the Star Trek franchise will take place 10 years before the original series and follows “the voyages of Starfleet on their missions to discover new worlds and new lifeforms, and one Starfleet officer who must learn that to truly understand all things alien, you must first understand yourself.” The cast includes Jason Isaacs, Mary Wiseman, Sonequa Martin-Green, Rainn Wilson, Doug Jones, Anthony Rapp, Michelle Yeoh, and James Frain.

Recently,CBS All Access revealed the late September premiere of Star Trek: Discovery ” set a record high for subscriber sign-ups in a single week” and subscription numbers have now doubled since last year. Additionally, the streaming service announced season one will be divided into two chapters, with the first part ending with episode nine on November 12th. The second chapter will begin in January.

What do you think? Have you seen Star Trek: Discovery? How does it compare to previous Star Trek series?

This show is thought provoking, action laden and full of character subplots. It is the first Trek season that I have fully enjoyed and I’ve been a trek fan since before getting a “Spock” haircut from a reluctant Max Nimoy.

I have seen all the star trek movies and shows from Deep space 9 , Enterprise , Voyager, and ST the Next generation,! they all had different elements in those shows , and I love them ALL!! my point is stop looking for something similar to the original Enterprise ! keep your mind open to new discoveries and that is what Star Trek Discovery is all about ! if not you get the same-mo all the time and your mind is stuck in the past , ya need to move on and get with the new series !!

It’s not hard to “break records” for “subscribers” when you are giving membership away for FREE for the first month. I can guarantee you the President of CBS won’t be giving out any additional information on how many of these “subscribers” drop the All-Access Service once that free time is over. That’s none of your business.

Love it, love it, and love it

STD cuts out the heart, soul, optimism, exploration, teamwork, logic and humor of Trek, and gives us unlikeable characters fighting in an incoherent, grimdark war world. It’s ant-Trek from the mirror-verse. Michael is begging for a goatee.

I liked it. Im a trekkie. enjoyef T.O.S. & next gen. didn’t care for deep 9. watched some episodes of both enterprise and voyager, eh!. But i like new tech visuals of this new show. also i seen all trek movies.

Orville all the way… My son and I watched Discovery, but found it totally off from the previous shows, we decided to stay with Orville, it’s funny and we like it. Oh, and it is free! 🙂

Record sign-ups is one thing, but how many stuck around after the free trial was over?

I’m not sure who the viewers are, but none of my friends who also watched other Star Trek shows will pay to see Discovery. Perhaps someday it will work its way to another streaming service and then we can see what the fuss was all about.

TomcatNASCAR
Reply to  Why Watch

I wonder who is watching Discovery. There was a poll on the “After Trek” show & 77% of the responders thought “Plomeek Soup” was a Klingon dish. An additional 14% thought a Jumja stick was also Klingon. To me, this indicates the die-hard Trek fans are not watching. And I would expect Trekkers to watch “After Trek”.

watched 2 episodes and that was 2 too many. this show is a steaming pile.
the federation is fighting to basically assimilate the “black” klingons into the SJW socialist federation cause of course the liberal federation know better. IOW stafrleet is the Borg or is it Europe colonizing Africa?

I was one of tbed subscribers but I will be unsubscribing soon as it was so very disappointing. I s have been a life time star trek fan and this show is star trek in name only. I am not a nit picker and upset by the updated look but they have thrown so much of the established history of star trek in the trash. The writhing and acting is also sub par. The effects look cool but that is not enough to substain a show.

The show is great. And I have been watching Star Trek for more than 30 years. Yes it is different from the original and so what? It is a different tone. Try to apreecciate the good things and enjoy a great scifi show on TV. And sorry to disagree, but we have to leave the confort place and try new things for the franchise. If it didn’t work, so bad. But it does work. It is interesting and i am eager to watch episode 4.

As big a fan of the original Star Trek I am, I am not watching Star Trek:Discovery any more. Since all the cast members had themselves photographed ‘taking the knee’ (as it is known), and I find this disrespectful. There is no way I will watch a program that gets involved with the politics of the day. They are there to act, to tell a story,and that is all. Besides, we’re having fun watching ‘The Orville’ ..much more fun. Oh,and then there is the changing of the line “where no MAN has gone before” to “where no ONE has gone… Read more »

This is a joke post right, my sarcasm monitor is just blinking out, right? No Star Trek fan could ever be against fixing social injustices or supporting equality because that is everything Star Trek stands for. I think your Orville comments broke my sarcasm meter because I agree The Orville is a much better show, Discovery is a ship of war and that is not Star Trek. It makes for OK Science Fiction but it makes horrible Star Trek. The Orville is FUN Science Fiction, we have not had FUN Science Fiction since syfy’s Eureka and Star Trek before that… Read more »