“The future may be determined by our actions.” CBS All Access has just released a new trailer and ordered an extra episode for season two of Star Trek: Discovery. 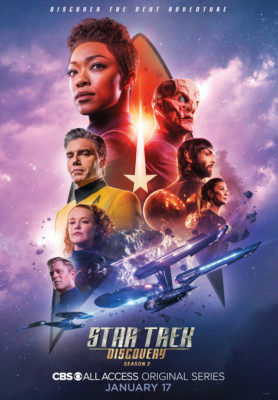 Dec. 13, 2018 – CBS All Access today revealed the official trailer and key art for the highly anticipated second season of STAR TREK: DISCOVERY and announced that the second season will be extended to 14 episodes, from the previously announced 13.

After answering a distress signal from the U.S.S. Enterprise, season two of STAR TREK: DISCOVERY finds the crew of the U.S.S. Discovery joining forces with Captain Christopher Pike on a new mission to investigate seven mysterious red signals and the appearance of an unknown being called the Red Angel. While the crew must work together to unravel their meaning and origin, Michael Burnham is forced to face her past with the return of her estranged brother, Spock.

Season two of STAR TREK: DISCOVERY premieres Thursday, Jan. 17, 2019 at 8:30 PM, ET/5:30 PM, PT exclusively on CBS All Access in the United States and will also be distributed concurrently by CBS Studios International on Netflix in 188 countries and in Canada on Bell Media’s Space channel and OTT service CraveTV. The series is produced by CBS Television Studios, Secret Hideout and Roddenberry Entertainment.”

What do you think? Have you seen Star Trek: Discovery? Will you watch the new season?

I liked the first season though it was a bit dark. Season two is a huge improvement. Love the humor, Captain Pike, the interweaving story lines.