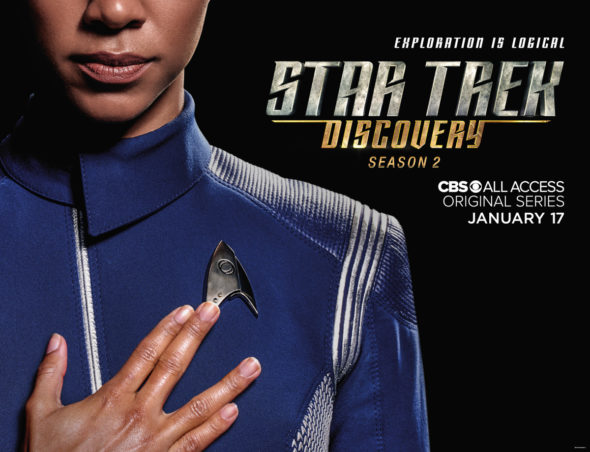 Will the discovery continue? Has the Star Trek: Discovery TV show been cancelled or renewed for a third season on CBS All Access? The television vulture is watching all the latest TV cancellation and renewal news, so this page is the place to track the status of Star Trek: Discovery, season three. Bookmark it, or subscribe for the latest updates. Remember, the television vulture is watching your shows. Are you?

Streaming on the CBS All Access paid subscription platform, Star Trek: Discovery stars Sonequa Martin-Green, Doug Jones, Shazad Latif, Anthony Rapp, Mary Wiseman, Wilson Cruz, Anson Mount, Mary Chieffo, Tig Notaro, Ethan Peck,  Rebecca Romijn, and Michelle Yeoh. A prequel to Star Trek: The Original Series, the drama follows the crew of the USS Discovery, during the cold war between the Federation and the Klingons. In season two, after answering a distress signal from the USS Enterprise, the Discovery crew joins forces with Captain Christopher Pike to investigate seven mysterious red signals and the appearance of a being called the Red Angel. Meanwhile, Commander Michael Burnham (Martin-Green) must face her past, with the appearance of her estranged brother — Spock.

Because Star Trek: Discovery streams on the CBS All Access subscription platform, we will not have access to viewership numbers for this series, unless or until they decide to release them.

Will Star Trek: Discovery be cancelled or renewed for season three? Since CBS All Access is still building its brand, and this is their flagship show, I suspect it will garner another renewal. Since that’s just speculation, I’ll keep an eye on the trades and press releases, update this page with any breaking developments. Subscribe for free updates on any Star Trek: Discovery cancellation or renewal news.

2/27/19 update: CBS All Access has renewed Star Trek: Discovery for a third season.

What do you think? Are you glad that the Star Trek: Discovery TV show has been renewed for a third season? How would you feel if CBS All Access had cancelled this TV series, instead?

Complete garbage that disregards virtually all Star Trek lore. Viewers want a star trek that fits within the canon.