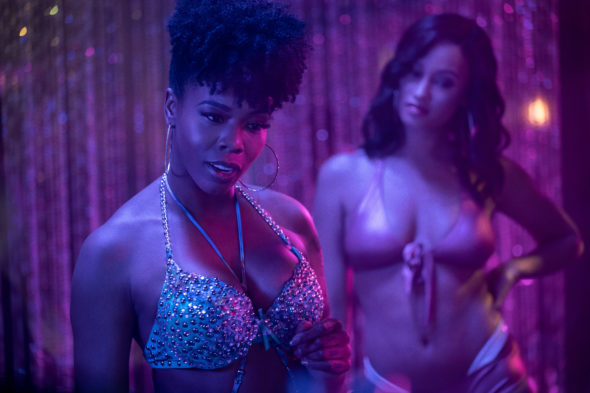 Starz is in The Pynk. The cable channel has renewed the P-Valley TV show for a second season. The new episodes are expected to air sometime in 2021.

A drama series, the P-Valley TV show stars Brandee Evans, Nicco Annan, Elarica Johnson, Shannon Thornton, Skyler Joy, J. Alphonse Nicholson, Parker Sawyers, Harriett D. Foy, Dan Johnson, and Tyler Lepley. The series takes place in a part of the Mississippi Delta where beauty can be hard to find. The story revolves around a little strip club called The Pynk and the array of big characters who come through its doors — the hopeful, the lost, the broken, the ballers, the beautiful, and the damned. What happens when small-town folk dream beyond the boundaries of the Piggly Wiggly and the pawnshop?

Debuting on July 12th, the first season of P-Valley averages a 0.07 rating in the 18-49 demographic and 239,000 viewers in Live+same day viewing. The first season wraps on August 30th.

Certified Fresh with 100% on Rotten Tomatoes

“The show understands the dreams and challenges of its captivating characters the way an exotic dancer knows the physics of her own body. And when it takes the stage and gets in the zone, it positively flies.” – The New York Times

“P-Valley is an unadulterated, unfiltered work that pours light into a specific slice of the Black experience – one that, from the outset, may not seem particularly artful or elegant – and turns it into an achingly beautiful song.” – TV Guide

Santa Monica, Calif., July 27, 2020 – Starz, a Lionsgate company (NYSE: LGF.A, LGF.B), announced today it has greenlit a second season for its new breakout series “P-Valley” from creator and showrunner Katori Hall after setting a new record on the STARZ App for most viewed series premiere at 17% above the previous high. The series has also demonstrated incredible momentum, growing its viewership on the STARZ App by 37% from episodes 101 to 103. To date, “P-Valley” ranks #1 among 2020’s new premium series with African American viewers (L+3, P2+ 262K) and is in the Top 5 of all premium series among African American households.

“‘P-Valley’ has quickly become this summer’s newest must-see television series as critics and audiences alike are taken up by the authentic and compelling characters that make The Pynk come alive,” said Christina Davis, president of original programming. “Katori has delivered a provocative drama that looks beyond the glitz and into the hearts and minds of these fully realized and compelling characters, exploring them through a female gaze that invites the audience to take a walk in their stilettos. We know Katori has a lot of incredible stories to tell and a lot in store for these women in a second season.”

“P-Valley” is the latest series on STARZ that exemplifies the network’s commitment to amplifying diverse voices and spotlighting stories that reflect a full spectrum of women both in front of and behind the camera. Led by first-time showrunner Katori Hall, the first season of “P-Valley” also featured all female directors. “P-Valley” is available on the STARZ app, On Demand and on STARZ in the U.S. and Canada and day and date on the Starzplay international streaming service across Europe, Latin America and Japan.

About “P-Valley”
Down deep in the Mississippi Delta lies an oasis of grit and glitter in a rough patch of human existence where beauty can be hard to find. This southern-fried, hour-long drama tells the kaleidoscopic story of a little-strip-club-that-could and the big characters who come through its doors – the hopeful, the lost, the broken, the ballers, the beautiful, and the damned. Trap music meets film noir in this lyrical and atmospheric series that dares to ask what happens when small-town folk dream beyond the boundaries of the Piggly Wiggly and the pawnshop.

What do you think? Do you like the P-Valley TV show? Are you glad that this series has been renewed for a second season on Starz?

Please Renew P-Valley for season 3. The show is awesome. I love that the shows focus is on telling stories that usually don’t get told. It focuses on a lot of issues and definitely gets conversation going and the cast is made up of excellent actors, the writing is superb and the costumes and makeup, pole dancing and performance is over the top. Starz what are you waiting on? Please Renew P-Valley for season three. We don’t want to have to wait a long time get those actors filming and bring the show back as soon as you can. Thank… Read more »

Great Story Line. Actors are so surreal, Look forward to every episode. Number 1 Fan.
Can’t wait for Season 2. My Husband loves this program. Watching Season 1 over and over !

My new favorite show. Loving the cast ,story line and the fashion. Thanks Starz