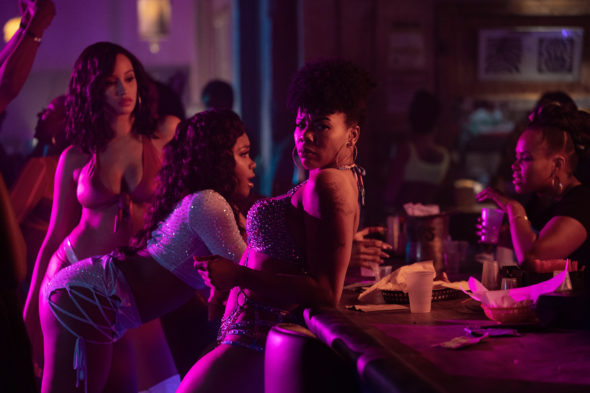 TV show description:
A drama series, the P-Valley TV show takes place in a part of the Mississippi Delta where beauty can be hard to find. The story revolves around a little strip club called The Pynk and the array of big characters who come through its doors — the hopeful, the lost, the broken, the ballers, the beautiful, and the damned. What happens when small-town folk dream beyond the boundaries of the Piggly Wiggly and the pawnshop?

Fierce and ambitious, Mercedes (Evans) is a true boss and “The OG”. After a long reign as the queen of the Pynk, this enterprising hustler is ready to hang up her Lucites and start anew.

Uncle Clifford (Annan), aka “The HBIC”, is sharp-tongued, wise and always serving us with a side of “extra extra.” He’s the owner of the finest “shake junt” in the Dirty Delta and is a gender-fluid hustler with a heart of gold plating.

Autumn Night (Johnson) is “The Chameleon”. A perfectly polished beauty, Autumn has a dark secret tucked deep in her Louis Vuitton bag.

Miss Mississippi (Thornson) is “The Masterpiece”. An idealist caught in a bad romance; this young mother is a Chocolate Venus dropped down in the Delta.

Gidget (Joy) is “The White Girl”. Quirky and earnest, Gidget is a navel-gazing, trailer-park philosopher. As a second-generation pole dancer, she views stripping as an Olympic-worthy sport and high art.

Lil’ Murda (Nicholson) is “The Street Griot”. Smooth, charming, crunk, hilarious and always able to make something from nothing, this former banger isn’t searching for another corner to rock. He’s searching for a stage.

Andre Watkins (Sawyers) is a Morehouse man through and through. This former Chucalissa son has returned home on mysterious business. With a Jack-and-Jill wife waiting for him back in Atlanta, he’s eager to close the big deal as quickly as possible — until he meets Autumn.

Patrice Woodbine (Foy) is a pimpstress with a pulpit and the judgemental “muva” of Mercedes. She’s a larger-than-life, wanna-be preacher, who can squeeze an offering from the homeless and have an entire congregation
speaking in tongues.

Corbin Kyle (Johnson) is the illegitimate child of the late, rich Johnny Kyle and his maid, Corbin’s always been an outsider caught between the black and white worlds.

Diamond (Lepley) is strong, silent and salty. With a hulking frame, there’s no better job for this ex-Marine than strip-club bodyguard and bouncer.

What do you think? Do you like the P Valley TV show? Do you think it should be cancelled or renewed for another season?