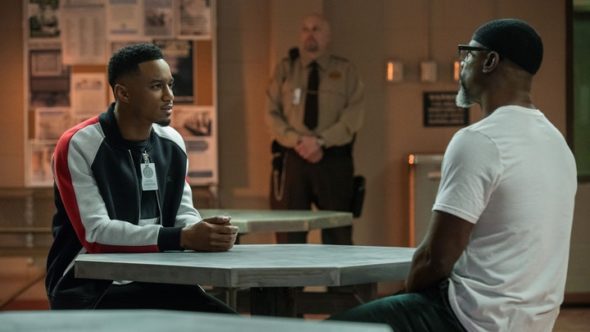 Starz has confirmed to us that it will run a double episode as the Survivor’s Remorse TV series finale this coming Sunday. The last two episodes of the comedy series are 4.09, “Family Ties,” and 4.10, “Answers and Questions.” Survivor’s Remorse stars Jessie T. Usher, RonReaco Lee, Erica Ash, Teyonah Parris, Tichina Arnold, and Mike Epps. The Starz TV series centers on Cam Calloway (Usher), a young basketball star whose lucrative contract with a pro basketball team catapults into the limelight.

What do you think? Are you still watching the Survivor’s Remorse TV series? Is this Starz TV show ending at the right time? Should it have been cancelled or renewed for season five?

That’s disappointing. I really liked the show and was hoping for a season 5.

I really liked this show an I also would like for u’ll to bring it back an do season 5. You can not really think ending a great tv show like this. Please bring it back…….

I can’t believe this show was canceled!!! I need a season 5, you can’t end season 4 like that without a season 5!!!

I wish they come back with a Season 5. I dont feel like we got the closure the fans deserve. I’ve been waiting for more and did not know that it was cancelled. Excellent show! Please bring back a Season 5 for a remembering closure.

This show deserves a season 5 , there’s no way it can end the way it did. Great story line, filled with moral and wisdom . Why cancel ?

THIS SHOW WAS AWESOME AND SHOULD NOT HAVE BEEN CANCELLED! First Being Mary Jane now this! Who do t want to see us winning….them or us?????

I really like Survivor’s Remorse. The casting is great & the story lines are very interesting. They left us withba cliff hanger. There was so much more to live out. Starz really should reconsider.

I knew it was too good to be true, a series with witty, intelligent dialog, meaningful, thoughtful and insightful scripts.

I started watching the show this season and I thought the show was really interesting. I wanted to see how the characters developed in dealing with their problems. I truly hope Starz will reconsider their decision to cancel the show at this time.

I like this show. I don’t follow many series but I love the characters and their quick wit. We need good positive Black shows with good script and good actors. I will miss it.