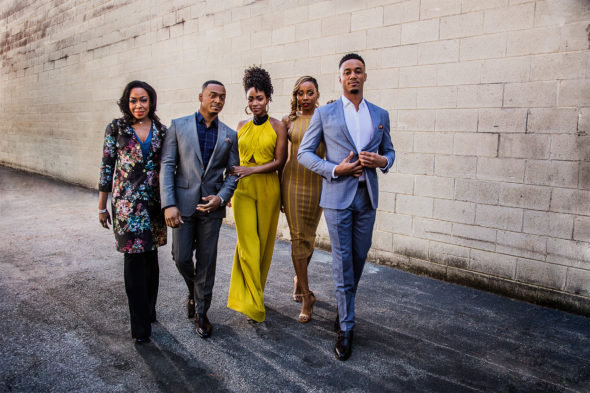 While only the strong survive, the Survivor’s Remorse TV show on Starz has been cancelled after four seasons. THR has confirmed there will be no fifth season of the scripted comedy. According to the report, “The season finale on Sunday will now serve as a series finale.” However, by our reckoning, there are two remaining episode in the fourth and final season. We have the descriptions for episodes 4.09 and 4.10, below.

Here is more, from The Hollywood Reporter

The current fourth season of the Starz basketball comedy will be its last, The Hollywood Reporter has learned. The season finale on Sunday will now serve as a series finale.

“We have been fortunate to work with incredible talents like Mike O’Malley, the executive producers and our cast on this very special show for four seasons,” Starz president and CEO Chris Albrecht said Tuesday in a statement. “While this may be the end of the Calloways’ story, we do believe that the themes Survivor’s Remorse confronted over the seasons, through a unique mix of humor and sober observation, will be appreciated for the insightful, heartfelt way they were addressed. We are proud of the show.”

Back in August of 2016, when Starz renewed Survivor’s Remorse for a fourth season, the premium cable network ordered 10 half-hour episodes. As of October 8th, only eight had aired. Check out these remaining descriptions from Starz press materials:

Cassie visits Rodney in prison as part of her journey to her Catholic confirmation. Reggie tries to persuade Cam to invest in Chen’s real estate deal. Missy gets some money from her father to invest in the same deal. Cam and Allison’s families get together for an engagement dinner.

Cam and Reggie are at odds about getting involved in a deal that involves abandoned school property, Missy is determined to pursue any lead that might get her out of the shadow of the Calloway clan and M-Chuck’s pursuit of her writing talent pits her against Cassie in a way that might never get resolved. A surprise revelation from Jimmy Flaherty leaves Cam with a choice to make: suit up or sell out.

We have asked Starz to clarify which episode will serve as the Survivor’s Remorse TV series finale. We have also inquired as to whether all ten episodes will run, or if one will remain unaired. When we know more, you will, too.

Survivor’s Remorse: A Look at the Ratings

What do you think? Are you a fan of the Survivor’s Remorse TV series? Should Starz have cancelled or renewed this TV show for season five?

Pleaseeeeeee…. You have me hanging on the edge…. And I find out it’s been over since 2017. Oh no!!!! Please work on coming back by winter!!! I’m seriously addicted to a great show with great meanings. Writers, stop what you are doing. And please get back to work. Do you need my assistance? Smiling and laughing all the way through this comment. Please Come back on by Winter 2021.

Survivor’s Remorse should have renewed their 5th Season

Sad to see this show was canceled. Funny show at times, sad at times but on the whole it had a good story line.

We need this show back on air this show sends out hope and good message for the black community teaching our black men how to conduct themselves as business men I have a son who is also into sports I think they have made a big mistake taking a good positive message show off the air. Please bring survivors remorse back #1 T.V show

There are too may loose ends. This is more of a SEASON ending and not a series ending. I REALLY enjoyed this show. I believe if there was some type if way to bring back Uncle Julius, the show would’ve kept it’s higher ratings. Honestly, I didnt know Survivor’s Remorse was ending until I watched the last 2 episodes for the THIRD time! They should find a way to bring SR back! And not just to end it.

I hate to hear the series is coming to its end I loved the show and was hoping for more seasons now I’ll just have to watch Wentworth with grandma :'(

A.B.T. This is ashame! Great stories.

I am disappointed. Excellent stories and great acting and writing. Great characters. I thought Starz would at least give it a 5 season. Mature story lines and great chemistry. I hope we see Survivors Remorse again.

The last episode has to be the worst ending of a show in history. Just too abrupt! Makes the Sopranos ending look prophetic. Typical Starz. I swore I would never watch Starz after they dumped Magic City the same way.

I wish they would add another season to tie up the loose ends.

this is the most refreshing and realistic show on television today. Everyone I have recommended it to has also fallen in love with it, we can’t wait until Sunday night for the next episodes. Truly sorry this decision has been made and hope the network reconsiders.