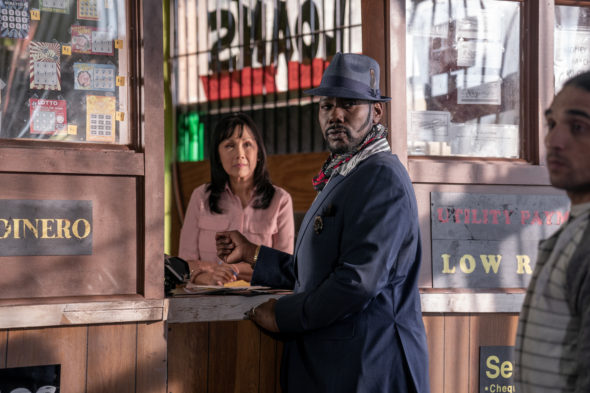 Are you staying in The Pynk in the first season of the P-Valley TV show on Starz? As we all know, the Nielsen ratings typically play a big role in determining whether a TV show like P Valley is cancelled or renewed for season two. Unfortunately, most of us do not live in Nielsen households. Because many viewers feel frustration when their viewing habits and opinions aren’t considered, we invite you to rate all of the first season episodes of P Valley here. Status Update Below.

A Starz drama series, the P-Valley TV show stars Brandee Evans, Nicco Annan, Elarica Johnson, Shannon Thornton, Skyler Joy, J. Alphonse Nicholson, Parker Sawyers, Harriett D. Foy, Dan Johnson, and Tyler Lepley. The series takes place in a part of the Mississippi Delta where beauty can be hard to find. The story revolves around a little strip club called The Pynk and the array of big characters who come through its doors — the hopeful, the lost, the broken, the ballers, the beautiful, and the damned. What happens when small-town folk dream beyond the boundaries of the Piggly Wiggly and the pawnshop?

What do you think? Which season one episodes of the P-Valley TV series do you rate as wonderful, terrible, or somewhere between? Do you think that P Valley should be cancelled or renewed for a second season on Starz? Don’t forget to vote, and share your thoughts, below.

I really enjoyed this show, and I am glad that they showed these women as “human beings” with real problems and not on drugs and alcohol! What I find even more provocative is that it is a black cast (and exceptional actors and actresses). The plot is interesting as well. I would watch this show on a regular basis.

Like heyyyyy!!!! P Valley got it going on. I cant find another show that bring it like it does. Reaching out to all audiences and able to keep me in suspense like it does, is awesome.

I greatly enjoyed this initial outing. Fascinating concept with new exciting actors with a black emphasis that is so neglected in American culture.

I liked this show & found it very interesting. I also appreciate the fact they take the time to explore the personal side of these women not just the exploitation of the stripper business. There is one aspect that I am struggling with & that is the conversations between the actors. I understand the southern accent can be difficult at times for a ‘northern’ ear to decipher but it’s the ebonics in combination with the southern accent of some of the actors that I’m have a hard time understanding. Yes, I am white so this may account for my ignorance… Read more »

When I run.into this problem, I turn my closed caption on so I can read what they saying. It’s hard sometimes to understand and I am African American in the North me