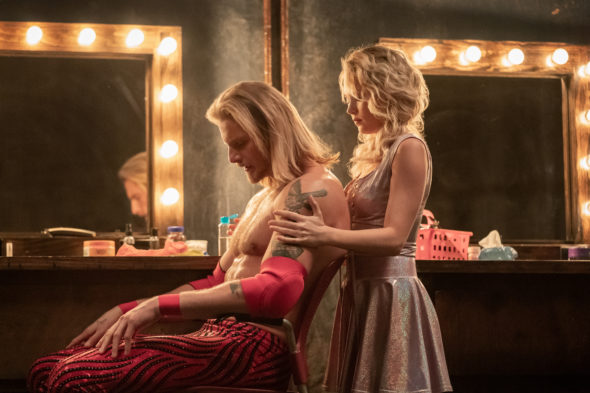 Can Jack and Ace successfully work together in the first season of the Heels TV show on Starz? As we all know, the Nielsen ratings typically play a big role in determining whether a TV show like Heels is cancelled or renewed for season two. Unfortunately, most of us do not live in Nielsen households. Because many viewers feel frustrated when their viewing habits and opinions aren’t considered, we invite you to rate all of the first season episodes of Heels here. *Status update below.

A Starz wrestling drama, the Heels TV show looks at the men and women who chase their dreams in the world of small-town pro wrestling. The series stars Stephen Amell, Alexander Ludwig, Alison Luff, Mary McCormack, Kelli Berglund, Allen Maldonado, James Harrison, and Chris Bauer. Set in a close-knit Georgia community, the series revolves around Jack Spade (Amell) and his younger brother, Ace (Ludwig). The story follows a family-owned wrestling promotion business and the rivalry between the two brothers as they war over their late father’s legacy. In the ring, somebody must play the good guy and somebody must play their nemesis, the heel. But in the real world, those characters can be hard to live up to — or hard to leave behind.

What do you think? Which season one episodes of the Heels TV series do you rate as wonderful, terrible, or somewhere between? Do you think that Heels should be cancelled or renewed for a second season on Starz? Don’t forget to vote, and share your thoughts, below.

This show is awesome!!!!!!! The story lines and characters are addicting.. Crystal is hott and can act .. they better have a 2nd series!!

I love this series I love the action reminds me of my early years incTucson Arizona we used to watch wrestling the local wrestlers were big time in my mother in law with handbag in hand would boo and Hollie at the bad guys it was a hoot!! Family thing this is such a great show good actors and great writing !!!

Please renewed another season look forward to seeing it every episode enjoy it and love it.

Actor here… We Love Heels. Alexander and Stephen are phenomenal. Love the cast and writing.. and that’s doesn’t come freely from me..

they need to MARKET this show Its got an awesome storyline. Come on STARZ!!! get to the commercials and other types of billboards or things of that nature. It will FLY!!!

Please renewed another season so good look forward every Sunday drama wrestling enjoy it and love it. Never missed any episodes of it.