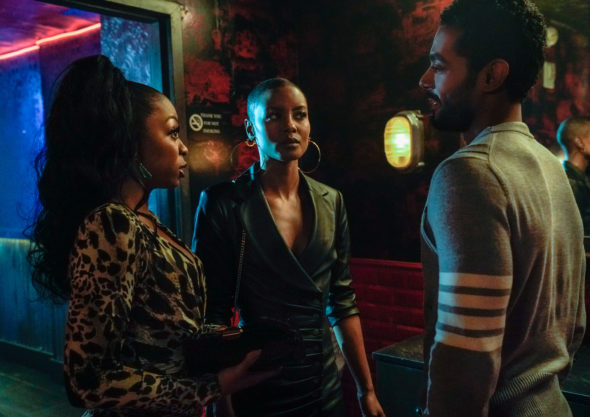 How strong are these ladies’ bond in the first season of the Run the World TV show on Starz? As we all know, the Nielsen ratings typically play a big role in determining whether a TV show like Run the World is cancelled or renewed for season two. Unfortunately, most of us do not live in Nielsen households. Because many viewers feel frustrated when their viewing habits and opinions aren’t considered, we invite you to rate all of the first season episodes of Run the World here.  *Status Update Below.

A Starz comedy, the Run the World TV series was created by Leigh Davenport and stars Amber Stevens West, Andrea Bordeaux, Bresha Webb, Corbin Reid, Stephen Bishop, Tosin Morohunfola, Erika Alexander, Nick Sagar, and Jay Walker, with Tonya Pinkins guesting. The show follows a group of Black women — vibrant, fiercely loyal best friends — who work, live, and play in Harlem as they strive for “world domination”. Whitney Green (West) is a perfectionist who almost always plays by the rules. An audacious romantic, Ella McFair (Bordeaux) is figuring out what she truly wants both personally and professionally. Renee Ross (Webb) is the vivacious, soon-to-be-divorced diva with a seemingly thriving career while Sondi Hill (Reid) is an erudite professional who begins to reevaluate both her career and personal priorities. This series revolves around enviable friendships and a group of ladies who are not just surviving but thriving together..

What do you think? Which season one episodes of the Run the World TV series do you rate as wonderful, terrible, or somewhere between? Do you think that Run the World should be cancelled or renewed for a second season on Starz? Don’t forget to vote, and share your thoughts, below.

LOVE IT!! I told everyone I know to tune in. Bring this show back for season Two please.

All of them really! But the last episode and the episode when they all went to therapy were phenomenal!