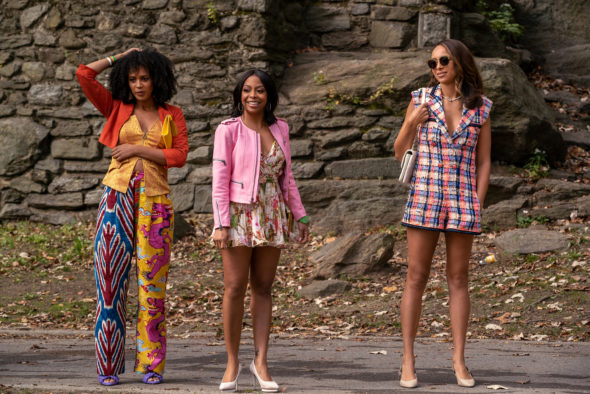 The four ladies of Harlem are coming back for more. Starz has renewed the Run the World TV show for a second season. Rachelle Williams will take over as showrunner from Yvette Lee Bowser. The first season finished airing in July.

The Run the World TV series was created by Leigh Davenport and stars Amber Stevens West, Andrea Bordeaux, Bresha Webb, Corbin Reid, Stephen Bishop, Tosin Morohunfola, Erika Alexander, Nick Sagar, and Jay Walker, with Tonya Pinkins guesting. The show follows a group of Black women — vibrant, fiercely loyal best friends — who work, live, and play in Harlem as they strive for “world domination”. Whitney Green (West) is a perfectionist who almost always plays by the rules. An audacious romantic, Ella McFair (Bordeaux) is figuring out what she truly wants both personally and professionally. Renee Ross (Webb) is the vivacious, soon-to-be-divorced diva with a seemingly thriving career while Sondi Hill (Reid) is an erudite professional who begins to reevaluate both her career and personal priorities. This series revolves around enviable friendships and a group of ladies who are not just surviving but thriving together.

Airing on Sunday nights, the first season of Run the World averages a 0.02 rating in the 18-49 demographic and 76,000 viewers in the live+same day ratings (including DVR playback through 3:00 AM). While these numbers don’t include further delayed or streaming viewing, they are a very good indicator of how a show is performing, especially when compared to others on the same channel.

“‘Run the World’ has been so passionately embraced by our audience and we are thrilled to bring fans another season,” said Alison Hoffman, President of Domestic Networks for STARZ. “Our incredibly talented cast and executive producers Yvette and Leigh are set to return, and we’re excited to welcome Rachelle back into the STARZ family leading as showrunner and executive producer.”

“Run the World” follows a group of smart, funny, and vibrant thirty-something Black women – fiercely loyal best friends – who live, work and play in Harlem. As they strive for world domination, they each navigate career highs and lows, hookups and heartbreaks that causes them to re-evaluate who they are and where they are going. At its core, it’s an authentic and unapologetic show about enviable friendship and not only surviving – but thriving together.

STARZ (www.starz.com), a Lionsgate company, is a leading global media streaming platform committed to delivering premium content that amplifies narratives by, about and for women and underrepresented audiences. STARZ is home to the highly-rated and first-of-its-kind STARZ app that offers the ability to stream or download STARZ premium content, as well as the flagship domestic STARZ(R) service, including STARZ ENCORE, 17 premium pay TV channels, and the associated on-demand and online services. In 2018, STARZ launched its STARZPLAY international premium streaming platform to provide subscribers access to the “best of global SVOD.” STARZPLAY, coupled with its STARZPLAY ARABIA joint venture, has expanded its global footprint into more than 55 countries throughout Europe and Latin America along with Canada, Japan, India and Indonesia. STARZ and STARZPLAY are available across digital OTT platforms and multichannel video distributors, including cable operators, satellite television providers, and telecommunications companies around the world. In February 2021, STARZ launched #TakeTheLead, a multi-faceted and innovative inclusion initiative expanding its existing efforts to improve representation on screen, behind the camera and throughout the company.

ABOUT LIONSGATE
Combining the STARZ premium global subscription platform with world-class motion picture and television studio operations, Lionsgate (NYSE: LGF.A, LGF.B) brings a unique and varied portfolio of entertainment to consumers around the world. Its film, television, subscription and location-based entertainment businesses are backed by a 17,000-title library and the largest collection of film and television franchises in the independent media space. A digital age company driven by its entrepreneurial culture and commitment to innovation, the Lionsgate brand is synonymous with bold, original, relatable entertainment for the audiences it serves worldwide.

Check out our status sheets to track new TV series pickups, renewals, and cancellations. You can find lists of cancelled shows here.
What do you think? Have you checked out the Run the World TV series on Starz? Are you glad that this comedy series has been renewed for a second season?

Love this show. So happy that it has been renewed for a second season.