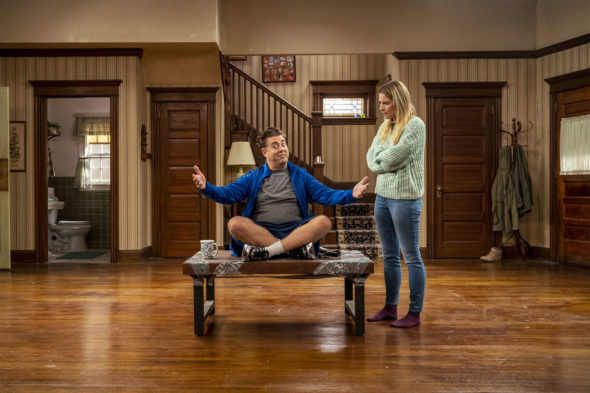 Viewers will be able to continue following Allison’s strange life. The Kevin Can F**k Himself series has been renewed for a second season of eight episodes on AMC and the AMC+ streaming service. A 2022 premiere date will be revealed at a later time.

A dark comedy, the Kevin Can F**k Himself TV show stars Annie Murphy, Eric Petersen, Mary Hollis Inboden, Alex Bonifer, Raymond Lee, and Brian Howe. Set in Worcester, Mass., the series tells the story of Allison McRoberts (Murphy), a woman we all grew up believing we knew — the prototypical “sitcom wife.” She’s beautiful and can take a joke, though, to be honest, she’s usually the butt of them. And, Allison’s married to Kevin (Petersen), a husky and “lovable” man-child who must’ve won some sort of marriage lottery. But, what happens when we follow Allison out of her husband’s domain? When she finally wakes up to – and revolts against – the injustices in her life? The series breaks television convention and blends multi-camera comedy with single-camera realism to make us ask: “who and what have we been laughing at all of these years?”

Airing on AMC, the first season of Kevin Can F**k Himself averaged a 0.07 rating in the 18-49 demographic and 301,000 viewers in the live+same day ratings (including DVR playback through 3:00 AM). While these numbers don’t include further delayed or streaming viewing, they are a very good indicator of how a show is performing, especially when compared to others on the same channel.

“It’s Kevin’s world, Allison’s just living in it. Or is she? This series was built on a novel and unique concept, and the creative team on both sides of the camera, led by Valerie and Annie, delivered a highly entertaining first season that really got people talking and rooting for the sitcom wife as never before,” said Dan McDermott, president original programming for AMC Networks and AMC Studios. “We are excited to see this talented team move from the finale’s cliffhanger and continue Allison’s journey, pushing the bounds of conventional storytelling every step of the way.”

Of the second season renewal, series creator Valerie Armstrong noted, “We’re so grateful to AMC for giving a home to our weird little show. Creating the first season of Kevin Can F**k Himself and getting to tell this story has been the joy of my life. We couldn’t be more thrilled to be stuck in Worcester with Allison for another year.”

Check out our status sheets to track new TV series pickups, renewals, and cancellations. You can find lists of cancelled shows here.
What do you think? Have you watched the Kevin Can F**k Himself TV series on AMC+ or AMC? Are you glad that this dark comedy has been renewed for a second season?

Unconventional and insightful show. Couldn’t stand the Kevin Can Wait, King of Queens, etc. shows and very pleased this outing highlights the problems with those.

A very different show. I think the concept is bold and fascinating and glad they got a renewal but the writers better pick it up or 704 Hauser Str will be going dark again.

I love this show! I’m so relieved to know its been renewed.

Oh thank goodness! I love this show so I was sure it was going to get cancelled.