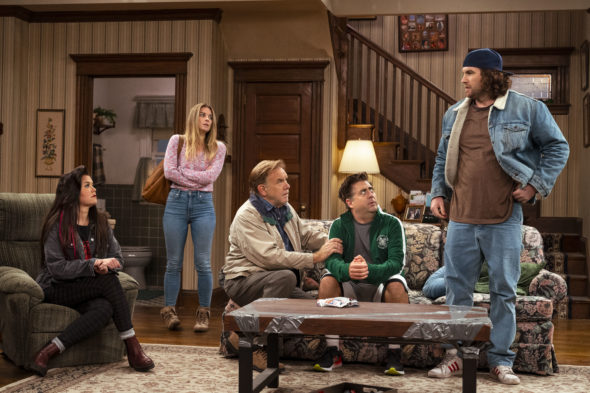 Will this marriage last? Has the Kevin Can F**k Himself TV show been cancelled or renewed for a second season on AMC? The television vulture is watching all the latest cancellation and renewal news, so this page is the place to track the status of Kevin Can F**k Himself, season two. Bookmark it, or subscribe for the latest updates. Remember, the television vulture is watching your shows. Are you?

Airing on the AMC cable channel, the Kevin Can F**K Himself TV show stars Annie Murphy, Eric Petersen, Mary Hollis Inboden, Alex Bonifer, Raymond Lee, and Brian Howe. Set in Worcester, Mass., the series tells the story of Allison McRoberts (Murphy), a woman we all grew up believing we knew — the prototypical “sitcom wife.” She’s beautiful and can take a joke, though, to be honest, she’s usually the butt of them. And, Allison’s married to Kevin (Petersen), a husky and “lovable” man-child who must’ve won some sort of marriage lottery. But, what happens when we follow Allison out of her husband’s domain? When she finally wakes up to – and revolts against – the injustices in her life? The series breaks television convention and blends multi-camera comedy with single-camera realism to make us ask: “who and what have we been laughing at all of these years?”

The first season of Kevin Can F**k Himself averaged a 0.06 rating in the 18-49 demographic and 301,000 viewers in the live+same day ratings (including DVR playback through 3:00 AM). While these numbers don’t include further delayed or streaming viewing, they are a very good indicator of how a show is performing, especially when compared to others on the same channel. There can be other economic factors involved in a show’s fate, but the higher-rated series are typically renewed and the lower-rated ones are cancelled. Find out how Kevin Can F**k Himself stacks up against other AMC TV shows.

Will AMC cancel or renew Kevin Can F**k Himself for season two? This show also airs on AMC+ (which is still working to build its subscriber base) and has a Schitt’s Creek vet as its star. The ratings aren’t impressive but I think it will be renewed. I’ll update this page with breaking developments. Subscribe for free alerts on Kevin Can F**k Himself cancellation or renewal news.

What do you think? Are you glad that the Kevin Can F**k Himself TV show has been renewed for a second season? How would you feel if AMC had cancelled this TV series, instead?

Worse show AMC has ever had!☹
Boring,stupid,ect