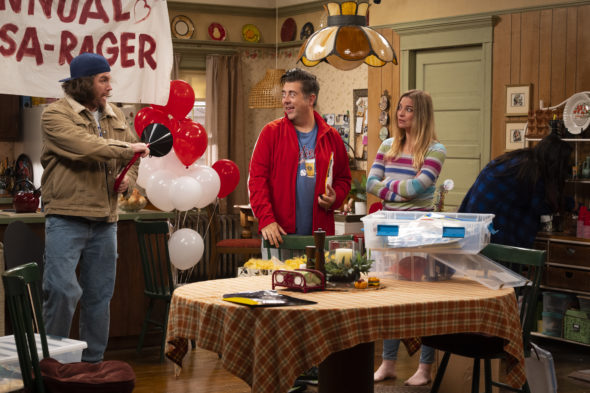 An AMC dark comedy, the Kevin Can F**K Himself TV show stars Annie Murphy, Eric Petersen, Mary Hollis Inboden, Alex Bonifer, Raymond Lee, and Brian Howe. Set in Worcester, Mass., the series tells the story of Allison McRoberts (Murphy), a woman we all grew up believing we knew — the prototypical “sitcom wife.” She’s beautiful and can take a joke, though, to be honest, she’s usually the butt of them. And, Allison’s married to Kevin (Petersen), a husky and “lovable” man-child who must’ve won some sort of marriage lottery. But, what happens when we follow Allison out of her husband’s domain? When she finally wakes up to – and revolts against – the injustices in her life? The series breaks television convention and blends multi-camera comedy with single-camera realism to make us ask: “who and what have we been laughing at all of these years?”

I am absolutely obsessed. I cannot wait for more. Love the concept and the execution!!!

So, I want to THANK YOU for keeping tabs on the stuff we TV junkies are jonesin to get a little taste of! Shows like “Kevin Can F Himself” are SO FEW AND FAR BETWEEN, and I for one am ON PINS AND NEEDLES hoping there’s a Season 2 to make good on that incredible cliffhanger– though, to be fair, the hurdles a good writer would have to clear to get there are higher than most, what with Neil being Patty’s brother, I have ultimate faith that they have the right people for the job. Thanks again and keep up… Read more »

I love this show! I can relate to Allison and how she feels about her husband. I’m sure there are a lot of women that have boorish husbands that they wish would finally grow up. I’m really hoping we get a lot of seasons!

Episode 2 least she’s starting to fight back.how about y’all helping her out with some of these episodes no wife should be treated like this

It’s hard to watch a woman being abused and degraded like this I hope by the fourth episode she leaving or killing or least find somebody else this is hard to watch. It would be nice if y’all explained how she wind up in this situation with such a slob. Allison deserves better watching the character of Kevin makes you want to throw up