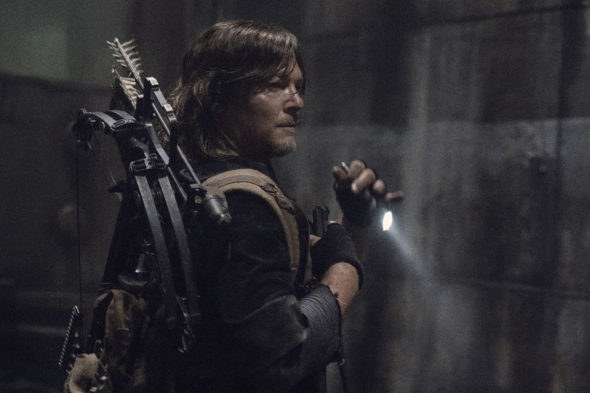 Who will survive the 11th season of The Walking Dead TV show on AMC? As we all know, the Nielsen ratings typically play a big role in determining whether a TV show like The Walking Dead is cancelled or renewed for season 12 (in this case, we know season 11 is the end). Unfortunately, most of us do not live in Nielsen households. Because many viewers feel frustrated when their viewing habits and opinions aren’t considered, we invite you to rate all of the 11th season episodes of The Walking Dead here.

An AMC post-apocalyptic horror series, The Walking Dead stars Norman Reedus, Melissa McBride, Lauren Cohan, Christian Serratos, Josh McDermitt, Seth Gilliam, Ross Marquand, Khary Payton, Cooper Andrews, Callan McAuliffe, Jeffrey Dean Morgan, Eleanor Matsuura, Nadia Hilker, Cailey Fleming, Cassady McClincy, Lauren Ridloff, Paola Lázaro, and Michael James Shaw. The show focuses on survivors of a zombie apocalypse as they try to stay alive under near-constant threat of attacks from “walkers”. With the collapse of their civilization, the survivors must confront other human survivors who have formed groups and communities with their own sets of laws and morals. As the 11th season begins, the group returns to Alexandria from a critical food mission but realizes it isn’t enough, so Maggie proposes a new plan. Meanwhile, those captured by the strange soldiers are relocated to another undisclosed location.

What do you think? Which season 11 episodes of The Walking Dead TV series do you rate as wonderful, terrible, or somewhere between? Do you think that The Walking Dead should be ending or should it have been renewed for a 12th season on AMC? Don’t forget to vote, and share your thoughts, below.

If ratings for The Walking Dead have dropped. Let’s consider: writers should go back and watch the way they FEEL when watching the first 8 or 9 seasons. Even when things seemed the very worst, I was NOT depressed. Sad in places, yes, frightened in places, of course BUT not depressed. Since Rick left ( but that’s not the only changing factor), the show’s aura has gotten more hopeless and toss on top of that that our real day lives with our own pandemic has been weighing us down… TWD needs more successes, more building and growing, less starvation, etc.… Read more »