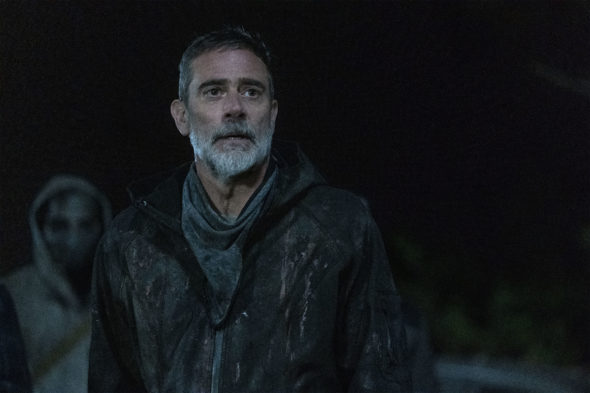 Will anyone find a happy ending? Has The Walking Dead TV show been cancelled? Renewed for a 12th season on AMC? The television vulture is watching all the latest cancellation and renewal news, so this page is the place to track the status of The Walking Dead. Bookmark it, or subscribe for the latest updates. Remember, the television vulture is watching your shows. Are you?

Airing on the AMC cable channel, The Walking Dead stars Norman Reedus, Melissa McBride, Lauren Cohan, Christian Serratos, Josh McDermitt, Seth Gilliam, Ross Marquand, Khary Payton, Cooper Andrews, Callan McAuliffe, Jeffrey Dean Morgan, Eleanor Matsuura, Nadia Hilker, Cailey Fleming, Cassady McClincy, Lauren Ridloff, Paola Lázaro, and Michael James Shaw. The show focuses on survivors of a zombie apocalypse as they try to stay alive under near-constant threat of attacks from “walkers”. With the collapse of their civilization, the survivors must confront other human survivors who have formed groups and communities with their own sets of laws and morals. As the 11th season begins, the group returns to Alexandria from a critical food mission but realizes it isn’t enough, so Maggie proposes a new plan. Meanwhile, those captured by the strange soldiers are relocated to another undisclosed location.

The 11th season of The Walking Dead averaged a 0.42 rating in the 18-49 demographic and 1.69 million viewers. Compared to season 10, that’s down by 58% in the demo and down by 44% in viewership in the live+same day ratings (including DVR playback through 3:00 AM). While these numbers don’t include further delayed or streaming viewing, they are a very good indicator of how a show is performing, especially when compared to others on the same channel. There can be other economic factors involved in a show’s fate, but typically the higher-rated series are renewed and the lower-rated ones are cancelled. Find out how The Walking Dead stacks up against other AMC TV shows.

We don’t have to wonder if AMC will cancel or renew The Walking Dead. We already know that season 11 is the end but spin-offs are in the works. Could the original series return someday? Subscribe for free alerts on The Walking Dead cancellation or renewal news.

What do you think? Do you think that The Walking Dead TV show should have been renewed for a 12th season? Is this AMC series ending at the right time?

We all in indonesia are love to see Walking Dead series , always waiting for new episode, even when one episode is end,we are hope to jump one week to see next episode.. PLEASE don’t end at 11 session. We really want to see more, every episode taught us so many society attitude and mercy to an enemy to change their life.

Whhyyy?So many fans to just end with Soo Many Qu.