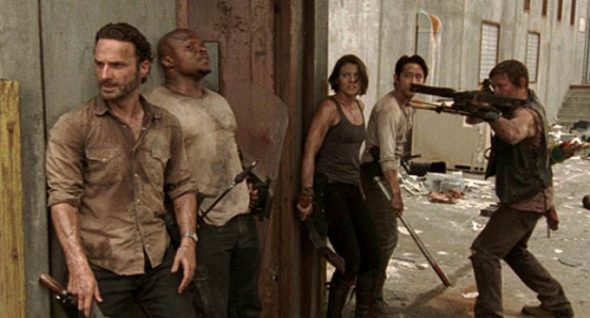 Is the end nigh for Madison and Travis? Has the Fear the Walking Dead TV show been cancelled or renewed for a fourth season on AMC? The television vulture is watching all the latest cancellation and renewal news, so this page is the place to track the status of Fear the Walking Dead season four. Bookmark it, or subscribe for the latest updates. Remember, the television vulture is watching your shows. Are you?

Since AMC has already renewed Fear the Walking Dead for a fourth season, fans don’t have to worry about an imminent cancellation. Still, the timing of that season four renewal was odd enough, that it makes me wonder if it will turn out to be a fourth and final season. I consider the timing odd, because it did not coincide with a season premiere or season finale, of either this TV series, or The Walking Dead. Instead, the renewal was attached to hiring new showrunners. That said, while Fear the Walking Dead‘s ratings pale in comparison to the original series, it is still the second highest performing AMC TV show. In all likelihood, both creative and financial factors will influence this TV series’ end date. Subscribe for free updates on any Fear the Walking Dead cancellation or renewal news.

What do you think? Should AMC renew the Fear the Walking Dead TV show beyond its fourth season? How would you feel if it cancelled this TV show, instead?

Cancel this dumb show, everyone knows the only ones who watch it are lesbians/100 fans for ADC and degenerates.

This show is “better” than TWD my ass, anyone who dares spew such tripe, go back to bed and wake up when we have your spin off cancelled like it deserves.

I love this show please keep it coming

Its actually better then twd now but thats not taking much as twd has fell of a cliff, just a shame season 2 was quite poor and pushed viewers away.

It’s not better than TWD, you’re just deluded. This show is muck and nobody in it can act. Don’t blame it all on season 1 and 2 when you know full when season 3 ratings were dealt a large blow too. It’s crap compared to the majority of most shows, let it die.

Please cancel it..The show should have never even been made.. The real walking dead is all we need..

I’ve been looking for Fear the Walking Dead on Now TV since I missed the beginning of Season 1 and wanted to catch up. Please do a rerun from Season 1 while you decide what you are going to do. The ratings may even be better the second time around.

No thanks, once was bad enough.

Please cancel this show and put it out of its misery. The plot is tortured and can only be best likened to watching a frenetic fit of attention.. ooh shiny! Yeah. That’s my point. I think it stays afloat because it’s paired against weak opposition. Look how when GoT premieres, they take a hiatus presumably for the full run. Smart, but if you’re strategy is to air when your only competition is big brother 39 and survivor end of the earth, what do you really have?

Cancel it started off good know waste of money