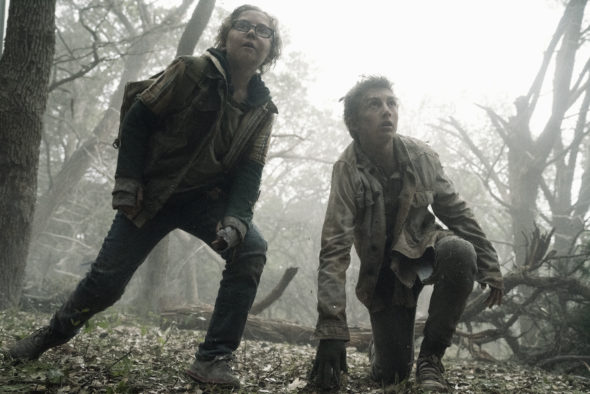 Is this the end of the beginning? Has the Fear the Walking Dead TV show been cancelled or renewed for a sixth season on AMC? The television vulture is watching all the latest cancellation and renewal news, so this page is the place to track the status of Fear the Walking Dead, season six. Bookmark it, or subscribe for the latest updates. Remember, the television vulture is watching your shows. Are you?

Will AMC cancel or renew Fear the Walking Dead for season six? Cancellation is unlikely, as it remains the cable channel’s second-highest rated series. I would also be surprised were it to end without a season-long “final season” send-off. This is a vital franchise for AMC — which has ordered another spin-off — so I expect them to handle it (and their relationship with producers) with care. Since this is just speculation, I will keep an eye on the Nielsen ratings, so subscribe for free Fear the Walking Dead cancellation or renewal alerts.

7/19/19 update: AMC has renewed Fear the Walking Dead for a sixth season.

What do you think? Are you glad that the Fear the Walking Dead TV series has been renewed for a sixth season? How would you feel if AMC had cancelled this TV show, instead?

No offence but they killed off 2 main characters that made up the family of 3, and even if they wanted to leave too doesn’t change the fact that I only watched it for the family of 3 now reduced to 1 I do like Elisha or Alisha she’s a great actress so I gave it a chance just for her, but the atmosphere isn’t the same, its because there will no longer be any interactions with the mother or the brother and thus its just not the same anymore. It’s becoming more and more like the walking dead which… Read more »

Please, please, please put the date on all of your information. It’s hard to tell if you are giving us the latest info. I have been surfing and surfing, and read a lot of great info, but it’s very difficult to tell if it is the latest. I finally found this page and see below in the comments that it is 2020 comments. MY QUESTION IS ARE WE GOING TO HAVE A RETURN IN 2020 FOR THE FINALE FROM 2020? ALSO WILL THE FEAR OF THE WALKING DEAD STILL BE THIS AUGUST? WHEN RESPONDING PLEASE ADD DATES, NOT JUST SEASON… Read more »

Oh thank you, thank you. I have been waiting and wondering. I would have been so angry. At first, being a true fan of “Walking Dead”, I felt like I was cheating. The more I watched “Fear The Walking Dead”, the more I was captivated. At least merge the people at some point. Don’t just cancel it. PLEASE!!!!!!!!!!!

FTWD and TWD are both ridiculously awful shows.

The show has become monotonous even though I love characters. Perhaps they are not being directed to their strengths. Also how can this show stay on and supernatural be taken off???

I LOVVVVED THIS SHOW… when it first came out. Ever since they added on all these new characters and did that crossover with TWD it has gone way downhill. I loved the show because it was kinda realistic and DIFFRENT FROM TWD. First of Al.. gah the camera thing is so annoying. Then Morgan like WHY. His whole peace thing is ruining the show. And the biggest mistake in my opinion was killing Madison off. If they dont bring her back AND KEEP HER THE SAME then I’m done. Also I don’t know what it is about june cant stand… Read more »

Fear The Walking Dead should be canceled almost no one is watching this show this season has been very bad all the episodes there is no plot cancel it right now. I will try it next season to see if it got better if it did not then I will never watch it again.

There were many good tv shows which were cancelled out of plummeting in viewing figure that they really didn’t deserve to be. On contrary, some shows keep staggering despite they’ve been overwhelming with negativities for a while. The point is most of the main stream tv shows are always about franchises and trends, after dosing you with a bit interestingly boosted pilot and a few follow up episodes. No wonder FTWD is still floating above the water even there is downhilling in viewership and ratings.

I hope this show gets cancelled. I don’t want to watch anymore. The storyline has gotten dull with all the video taping and far-fetched nonsense. They should send Lennie James back to The Walking Dead. This show has some good actors that are being wasted on a dull show.

This show should be canceled.

I can think of a lot more shoes that should have been cancelled a long time ago. The fear has gotten better then it use to be