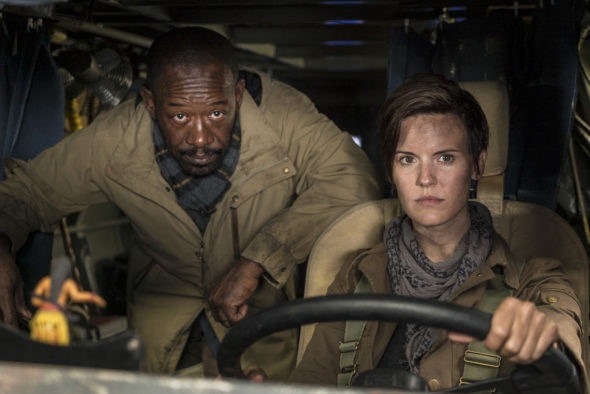 Is fear still the ruler of the day? Has the Fear the Walking Dead TV show been cancelled or renewed for a fifth season on AMC? The television vulture is watching all the latest cancellation and renewal news, so this page is the place to track the status of Fear the Walking Dead, season five. Bookmark it, or subscribe for the latest updates. Remember, the television vulture is watching your shows. Are you?

An AMC horror drama, Fear the Walking Dead stars Kim Dickens, Frank Dillane, Alycia Debnam-Carey, Rubén Blades, Danay Garcia, and Colman Domingo. In the fourth season, The Walking Dead‘s Lennie James brings his Morgan Jones character to the prequel series, as the recent past merges into the present struggle. While encountering new friends and enemies, the crew will fight for and with each other, as well as against the dead. Also joining in season four are Maggie Grace, Garret Dillahunt, Jenna Elfman, Kevin Zegers, and Evan Gamble.

7/29/2018 Status Update: Fear the Walking Dead has been renewed through season five on AMC. Details here.

What do you think? Did you expect AMC to renew the Fear the Walking Dead TV show for season five? How would you feel, had AMC cancelled this TV series, instead?

I agree with others, when they killed off Nick and Madison left, it lost a lot of its shine. I’m still watching it, but if it were canceled, eh, I’ll move on.