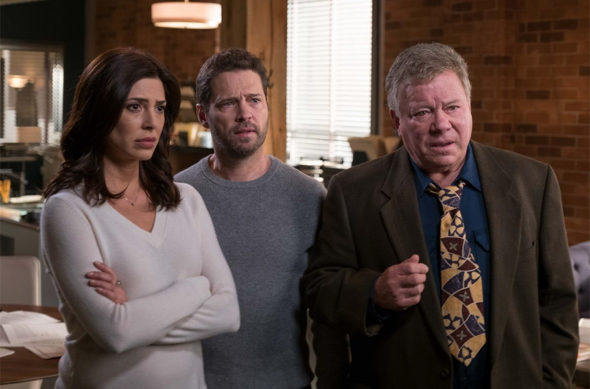 Are Matt and Angie still on top of things during the second season of the Private Eyes TV show on ION? As we all know, the Nielsen ratings typically play a big role in determining whether a TV show like Private Eyes is cancelled or renewed for season three (it’s been renewed in Canada). Unfortunately, most of us do not live in Nielsen households. Because many viewers feel frustration when their viewing habits and opinions aren’t considered, we’d like to offer you the chance to rate all of the Private Eyes season two episodes here.

What do you think? Which season two episodes of the Private Eyes TV series do you rate as wonderful, terrible, or somewhere between? Should ION cancel or renew Private Eyes for a third season? Don’t forget to vote, and share your thoughts, below.

I really like private eyes, and truly hope that season 3, which has already aired in Canada, will air in the states… or at least be available on SOME streaming channel/ device/ etc..

Really enjoy the showes. Please bring it back.

Miss Private Eyes a lot. It is great to see a show that actually uses a real city (Toronto) as its background. The stories are excellent and can’t wait for Season 3 on ION.

Please bring this show back, it’s a keeper.

This is a good show and should not be canceled. I hope it comes back for season 3

Really enjoy this show. Cast is good together. Hope it is renewed.

My kids and I LOVE LOVE LOVE Private Eyes! ION please renew or pick up the next season! Please!!!!!

Well, we are fully invested in Privat Eyes. ALL the cast are engaging and their characters are well played ,leaving us to want to know more about them and thier on-going stores. both regular and intermittent. Hope this one comes back for Season 3 here in the States, please.

My husband & I are totally hooked on Private Eyes, love the cast & everything about the show!! Anxiously waiting for season 3!!!